Black Yoshi is the secondary antagonist of the SuperMarioLogan series. He is Yoshi's cousin who lives at Mario's house where he often takes advantage of him for money.

He is voiced by Lance Thirtyacre.

Role as a character

Black Yoshi is mostly a villain, but he is sometimes an anti-hero.

Black Yoshi is a gangster who likes to play Call of Duty, drink grape Kool-Aid and eat KFC and Popeye's fried chicken, watermelon, a stereotype of African Americans. He also speaks in Ebonics (or African American Vernacular English).

He is also the announcer for the SuperMarioLogan Theme Song. In fact, he appeared the longest in the theme song.

In older videos, Black Yoshi did not wear the shoes he currently wears.

He also appears in some Puppet Pals videos.

Black Yoshi is a violent, homicidal, mean, evil, arrogant and aggressive yoshi who kills people and steals things. He commits crimes and does other bad things. He is also unintelligent, another aspect of being a stereotype of African Americans.

Despite being a flagitious and wicked criminal, he still has good intentions since he saved Mario from Peach attacking him and he treats Chef Pee Pee nicely and he is shown to be extremely nice to people until they make him angry.

He hates it when people touch his Call of Duty.

In newer videos, Black Yoshi acts whiny and immature and has became less violent and cruel, but still continues to commit crimes. An example of him whining and being immature is when he begs Mario to do stuff for him. 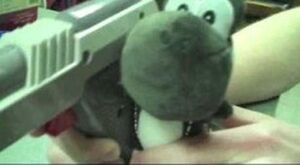 Black Yoshi with his gun 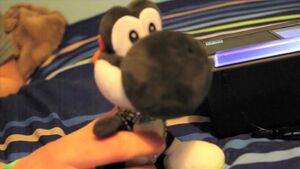 Black Yoshi with his silver chain 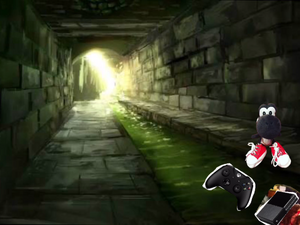 Black Yoshi's despair in the sewers as his Xbox move by the sewers water and the console lands on Beer.
Add a photo to this gallery

Retrieved from "https://villainsfanon.fandom.com/wiki/Black_Yoshi?oldid=128763"
Community content is available under CC-BY-SA unless otherwise noted.