Kill as many people as he can (temporarily succeeded).

Continue his killing sprees from within his game cartridge.
Kill Tom and drag him into the game (both ongoing).

Trevor, later known as Burnhog, is an antagonist created and owned by Voxbun.

He is the undead spirit of a deranged serial killer who possessed a Sonic the Hedgehog 3 cartridge after dying, as well as the Sonic character in-game, in order to continue his killing spree from when he was alive. He is Thomas Caddel's arch-nemesis as well as his mother's killer.

Burnhog's charred form appears as a taller version of Sonic with completely grey fur and missing patches of skin, allowing for parts of his skeleton to be seen. His face is completely burned off, revealing his skull, and his quills are messy and generate fire.

His faker form appears as near perfect copy of Sonic, but with blue arms and a large mouth with yellow teeth. However, he is also capable of shapeshifting into a perfect Sonic disguise with no noticeable errors or other features that would give away his identity.

As a human, Trevor is a dark-skinned man with dark brown hair and stubble, a dark suit and a light shirt.

Both in life and death, Burnhog is a sick, twisted and cold-blooded serial killer who takes pleasure in the murders he carries out and the terror he generates within his victims. After becoming a spirit, he had no plans to stop what he loved doing and sought to continue killing just for the thrill of it, taking enjoyment in torturing his victims (preferably Tails) and resurrecting them infinitely to continue torturing them just for fun. Even when Burnhog was just a child, he was a disturbed kid and appeared to possess homicidal urges from a young age, purposefully killing Tails in the game because he thought he was sentient and murdering animals.

Burnhog also is said to be very arrogant and particularly proud of the murders he committed when he was a human, and enjoys bragging about them. It's likely that the media's coverage of his crimes lead to him developing a large ego and a fondness for the attention he received, with his arrogance eventually leading to his downfall.

It's also mentioned that while working as a photographer, Burnhog was very well liked and respected by his team, displaying a charismatic nature to the killer.

Very little is known about Burnhog's early life. It's said that when Trevor was a child, he would routinely play Sonic the Hedgehog 2 as Tails and purposefully kill himself by sending him into spikes and drowning him, as he believed he had sentience. Trevor eventually moved on from killing video game characters and instead focussed his attention on mutilating and killing animals.

When Trevor grew into an adult, he became a notorious serial killer who murdered several people, although his motivation for doing so is unknown. It was said that the killer would locate people during the weekends when he wasn't working as a photographer and kidnap them, bringing them somewhere to murder. One of his victims was the mother of a college student known as Thomas Caddel. Over time, Trevor's hubris grew and his actions became more sloppy as he began killing in different areas, giving law enforcement an easier time tracking him down. Although the circumstances of his death are relatively unknown, Trevor was located by the police and burned alive in his own home, which is why his charred form reflects the way he died.

After dying, Trevor's spirit refused to rest and possessed a Sonic the Hedgehog 3 cartridge, as well as possessing the in-game avatar of Sonic, hoping to continue his killing sprees from within the game. Eventually, his cartridge would end up in the hands of Thomas Caddel, the son of one of his victims. 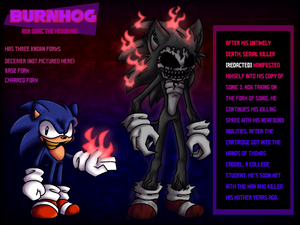 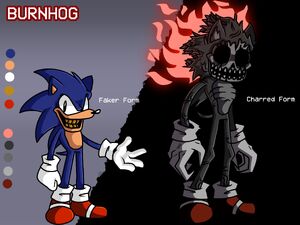 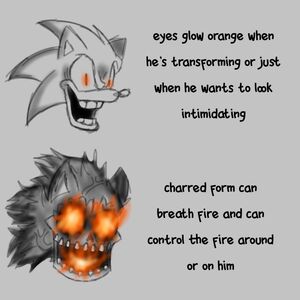 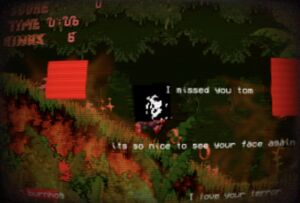 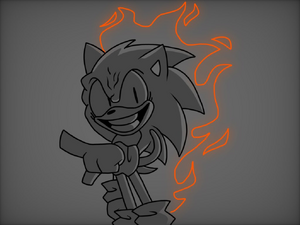 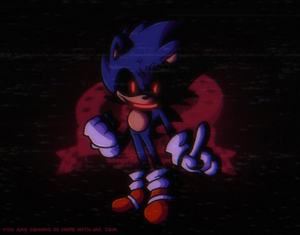 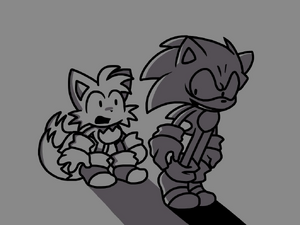 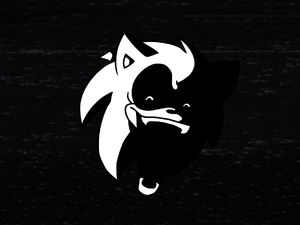 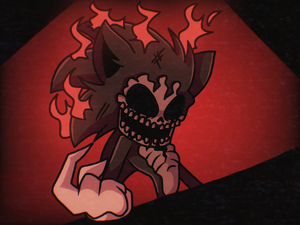 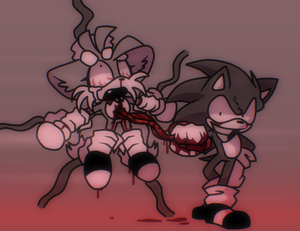 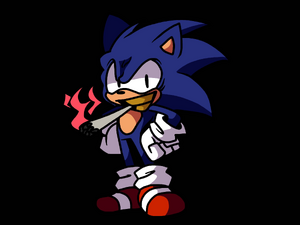