Conker is a main antagonist and he's a villain from A War Academy. Lucky, Conker is a king from the throne room. Conker wanted to be a king, but, Maki said, "Conker, You're a king!" and Conker said "Thank you very much!" When, he was happy. Conker is a red squirrel, he was walking or running or eating, and when, he was sleeping. Conker was died in "A War Academy Comic Book" because he got killed by Junko Speariness with a knife.

Conker is a squirrel, and he's a king called, "King of the master" and when, he's a headmaster. Conker was a king, and also said, "Long Live The King" and he was a king in the throne room. Conker decided to see Maki in Conker's House and play videogames. Multo was triggered Conker for eating Multo's lunch, and he got grounded for 5 weeks. Conker was so grounded for eating Multo's Lunch for 10 minutes. Conker was very sorry for eating Multo's lunch for 4 seconds (not as a same as 4 and for) Monokuma wants to kill Conker, and because, He wants to kill the red squirrel and eat him. Frienessicekeln Rex said, "I Hate Red" and Conker said "I do not care! S**thead!" and Conker was leaving, and because, Conker wants to get out of this jungle and he said, "I'm leaving! Never! Ever Again!" and will never come back here. Dark Truder was coming his house and, Dark Truder said, "Hello! You're Ugly and Stupid, and the world is going on here?" And Conker said "Damn You!" and Dark Truder is leaving in his house and will never come in his house again. Conker was decided is walk in the trails and he's afraid of the bear and he yelled "Oh my God! It's a bear! A bear! A bear!" and run before bear comes in, and it will never eat Conker before, that was encounter. Conker was happy to survived and he was alive to see the War Academy, and he was happy to be alive and he said, "Hooray! I'm survived, and that was til then I will play my piano for sometimes." And that was The End. Conker was murdered by Junko Speariness with a knife, and he died in A War Academy: Comic Book. Conker is telling Junko Speariness and that was very quiet to whisper, and She killed Conker with a knife and he was a murdered by a knife and that used by Junko Speariness. Conker was murdered by a knife that used by Junko Speariness. After Conker was murdered, the wall says 10335500 behind Junko Speariness in A War Academy: Comic Book. Conker was presumed deceased, and because, He was stuck in the tree with Maki. Conker understand with Maki and both cannot get out of the tree and the fireman was saving Conker and Maki by getting stuck in the tree and he was save and both can survived in the ground so easy in A War Academy: Newspaper.

Conker was appear in A War Academy and he was survive in this throne room and drink milk.

Conker was climbing in the tree with Maki and both stuck in the tree, and the firemens helps Conker The Squirrel and Maki are save in the house, and that was too easy. 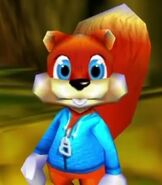 Conker appeared in A War Academy 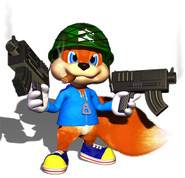 Kurokuma former
Add a photo to this gallery

1 of 4
Add photo
Retrieved from "https://villainsfanon.fandom.com/wiki/Conker_The_Squirrel_(A_War_Academy)?oldid=133280"
Community content is available under CC-BY-SA unless otherwise noted.