Brooklyn Guy
This Guy
The Jokester

Killing people for photographs and posing as his brother.

Kill anyone who opens the secret door
Kill Mario, Rosalina, and Jeffy for photographs (all failed)

Does Bad Things Guy was a major antagonist in SuperMarioLogan's YouTube's videos (particularly The Secret Door!). He is Brooklyn T. Guy's only identical brother who filled in for him for 7 months until May 10th, 2017.

It is unknown about Does Bad Things Guy's past. Along with his twin Brooklyn T. Guy, he has a thirteen non-identical brothers; Does Good Things Guy, This Guy, What Guy, A Guy, Chicago Guy, Manhattan Guy, San Francisco Guy, Las Vegas Guy, Philadelphia Guy, Frank, and Family Guy.

Does Bad Things Guy murdered his wife for unknown reasons. Then, some new people moved into his house, and Does Bad Things Guy told them not to open the secret door. However, they opened the door, so he had to kill them. He also took pictures of their dead bodies. At some point, he murdered an unnamed man at Thanksgiving by frying him in an electric chair.

Mario notices that the house has two stories. Does Bad Things Guy calls Mario an "idiot" for not paying attention to that fact and tells them to look up the second floor. They go upstairs and see a balcony view to living room. They check out another room and Does Bad Things Guy tells them that nobody should open the secret door. He shows them the game room, which Bowser thinks Junior will love while Rosalina finds that Jeffy will love. He shows them a red bedroom with a Television which they find it to be pretty good. Bowser punches Mario, tells everyone of the room so he can watch "Charleyyy & Friends", and slams the door into them. Does Bad Things Guy asks Mario and Rosalina about their opinions on the house, which they respond by saying that they loved it and Does Bad Things Guy leaves.

Before The Secret Door!

At the end of Bowser Junior's Big Spill!, he is heard saying "I told you not to open that".

While Mario, Rosalina, and Jeffy play a game of hide and seek, Jeffy tries to look for a place to hide, but heard knocking. He finds the secret door, opens it, and enters inside it. When Jeffy's loud scream is heard, Mario and Rosalina decide to find out what's going on. Horrified by finding the dead bodies residing in the room the door led to, Mario, Rosalina, and Jeffy decide to call the cops. So, Does Bad Things Guy (posing as the Brooklyn Guy) arrives. When Mario and Rosalina show him the dead bodies, he knocks them out with a mallet as the screen fades to black.

Mario and Rosalina wake up chained up and scream "What's going on?". Does Bad Things Guy responds by saying that he'll be there with them in a minute and says that a female victim of his was impatient as he was hacking one of his victim's intestines. He tells them about a guy who wouldn't stop making noise and shows them his corpse. Because of Mario, Rosalina, and Jeffy opening the door, Does Bad Things Guy cuts one of his victims' chest with a saw and hits Rosalina with a hammer. He also takes a picture of the victim's chest and cuts another of his victims' jaw with a kitchen knife. He reveals to Mario that he takes uniforms, crawls out the windows, knocks on the front door and does whatever Mario needs him to do. He says to him that they wouldn't had any problems if he followed the one simple rule: NOT opening the Secret Door.

He decides to kill them, starting with Rosalina who he calls "Loud mouth". He says "Where's my saw?" before being shot in the head by his only-identical brother Brooklyn T. Guy with a Glock 17.

Brooklyn T. Guy unchains Mario, Rosalina, and Jeffy and informs that he went on vacation for seven months, so he filled Does Bad Things Guy.

Other appearances in non SML series

Despite his death, he appeared in A Project Guy as he mentioned that someone revived him by The Past Machine and he kidnaps Bowser Junior, Joseph and Cody, impersonates Brooklyn T. Guy and steals a bike.

In total, Does Bad Things Guy murdered twenty-eight people both canon and non-canon. 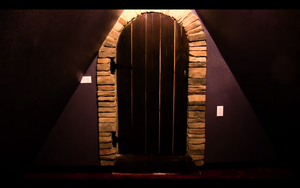 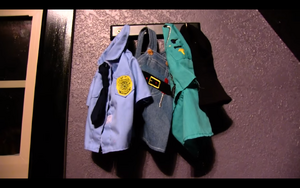 Does Bad Things Guy's uniforms.
Add a photo to this gallery 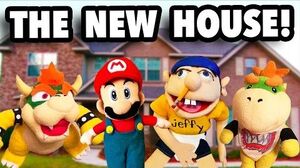 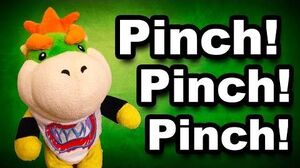 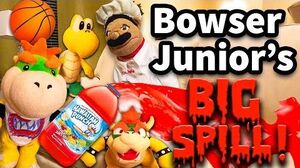 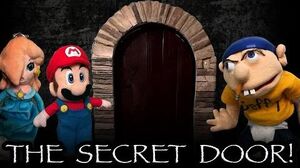 SML Movie The Secret Door!
Add a photo to this gallery

Retrieved from "https://villainsfanon.fandom.com/wiki/Does_Bad_Things_Guy?oldid=168858"
Community content is available under CC-BY-SA unless otherwise noted.