Doofy the Dragon is a minor villain in SuperMarioLogan. He is a suicidal green dragon who is Bowser Junior's favourite TV show character.

He is the titular protagonist villain of the TV show, Doofy the Dragon.

In Bowser Junior's 8th Birthday!, Doofy appeared as a costume as Brooklyn T. Guy was wearing his costume.

He was also voiced by Logan Thirtyacre's girlfriend, Chilly Jimenez in Stuck!.

Doofy also has an unnamed wife who left him.

Though, since COPPA is considering adding an age directed choice for YouTube channels, Doofy might come back.

Doofy is a stupid, insane, violent and evil dragon who likes killing himself and other people. But he is funny and professional nonetheless.

Doofy is a green dragon (although he is gold and purple in some parts).

He also has two wings, blue eyes and purple nails.

Appearances that are not part of the SML series

Doofy appears as a minor antagonist in a real life series called A Project Guy. However, the A Project Guy version of Doofy the Dragon is not a puppet but a piece of paper instead but he is currently a puppet.

In A Project Guy, he was revealed to be the arch-enemy of Charleyyy. 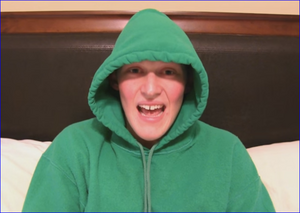 Doofy the Dragon as a human in Bowser Junior Orders A Pizza!
Add a photo to this gallery

Retrieved from "https://villainsfanon.fandom.com/wiki/Doofy_the_Dragon?oldid=148001"
Community content is available under CC-BY-SA unless otherwise noted.