Pretending to be a meat ball

Drawing Jeffy is a villain in SuperMarioLogan. He is a clone of Jeffy who likes to say the word "Mayonnaise".

Just like his original counterpart, Jeffy, he is voiced by Lance Thirtyacre. It is suggested that Bowser Junior poorly drawing him was the reason for his mannerisms.

There are some fans who claim that he is similar to and based off DoodleBob from SpongeBob SquarePants because they are evil drawing clones who can barely speak English.

Drawing Jeffy's mouth has the same shape and the edge of his mouth is partially green, which means he is made out of a Kermit the Frog puppet.

He is also a somewhat main character in Jeffy's Summer School.

In Jeffy Sneaks Out!, he was also known as Play-Doh Jeffy.

Drawing Jeffy was from a fan mail video on Chilly's YouTube channel in which they opened it and Logan found it so funny. So, he immediately made a video with Drawing Jeffy in it.

Although Drawing Jeffy gets revived a few times in the SML universe after his death, he does not get revived in the Puppet Pals universe and he stayed deceased.

Drawing Jeffy is a drawing version of Jeffy who has big eyes, a orange nose with a pencil inside of it.

He also has a yellow shirt that says Jeffy on it and has blue pants. He also has a mayonnaise lid as a helmet on his head.

Drawing Jeffy is dimwitted and fun-loving and likes to say the word "Mayonnaise". He is occasionally evil as he is sometimes shown to be a murderer as he killed a couple of people.

He also likes to pretend to be a Meatball.

In Jeffy's Home Alone!, it was revealed that Drawing Jeffy likes looking at females' boobs.

Despite being a villain, Drawing Jeffy is sometimes neutral. 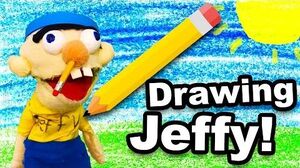 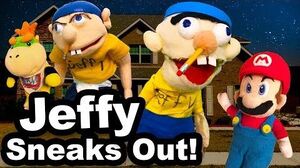 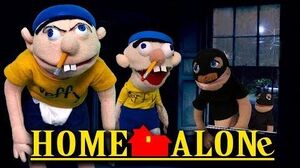 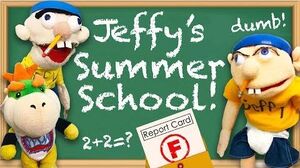 Retrieved from "https://villainsfanon.fandom.com/wiki/Drawing_Jeffy?oldid=131179"
Community content is available under CC-BY-SA unless otherwise noted.