Leader of his hacking group

Get revenge on Notch for firing him by killing him (ongoing).

Torture and kill as many players as possible (succeeds on some, but fails on others).
Kill Herobrine (ongoing).
Destroy Minecraft or take over it (failed).

Entity 303 is a fan-made, popular urban legend originating from the 2009 sandbox videogame series, Minecraft, and the titular main antagonist of the Creepypasta story of the same name.

Entity 303 is a former Mojang employee who was fired for unknown reasons, and wants to get his revenge on Notch for firing him by destroying Minecraft and tormenting its players. Entity 303's physical appearance consists of purely black skin, a white parka and glowing red eyes.

He was created by TheSpeed179.

The first encounter of Entity 303 was a private email sent to TheSpeed179, who would later document his own sighting of the creature. In the email, the user named Frankie told Speed about how he was playing a regular Minecraft game on a private server with his friends, John, Vincent and Brady. The four had built a survival city located in a desert biome when John noticed something strange in the chat. The server was only using two plugins, "Essentials" and "SocialSpy", the latter plugin was able to detect an unknown user by the name of "player.number:303" using the "/stop" command. The incident would induce major anxiety in John, who believed that the unknown player was a hacker trying to shut down the server, which was whitelisted, meaning that no one else could join except for them.

Around 20 minutes later, Frankie and Vincent spotted a white-skinned, red eyed figure in the distance, while Frankie went after it and Vincent's player remained still, not talking in the Skype chat. The figure disappeared and Vincent disconnected from both the server and the Skype chat, not responding to any of Frankie's repeated calls and text messages. Frankie's screen started to glitch, spamming “Object successfully summoned” by “player.number:303.” in the chat repeatedly. Suddenly an unnamed user joined the Skype chat and said nothing, Brady disconnected and John began to panic even more that he had done previously. The anonymous Skype caller finally put his facecam on, John left as the caller, who was buried in the darkness of the screen muttered "Make a wish". Frankie's Minecraft chat then began spamming “FILE OVERLOAD” in red text, along with “MAKE A WISH” in gray text. Frankie was then suddenly poisoned and was unable to move his character, exit the game or turn off his computer. A player in a white parka with completely black skin and red eyes then rushed up to Frankie, typing in the chat “Make a wish, and say goodbye to your friends", before killing Frankie and shutting down his computer.

Frankie chose to instead log on to his laptop to try and reach his friends, but to no avail. The next day at school Brady finally shows up again and informs Frankie that John and Vincent had gone missing, Frankie ditched school and ran to John's house only to be informed by John's mother that John had snuck out at night and committed suicide, leaving only a note detailing his fear for whatever was targeting him. On the back of the note read "MAKE A WISH".

Frankie went to visit Vincent's house and found that no one was home, he managed to sneak in and found "MAKE A WISH" written in red marker on the walls of Vincent's bathroom. He finishes his tale by telling Speed to watch out for Entity 303 at all costs and promising to email him again if he discovers more information.

The second encounter is documented by TheSpeed179, who recounts his encounter with the mystery player during a session on XBOX 360 Minecraft. Soon, a player's house started burning and everyone in the game began blaming the host for abusing his privileges. The group stopped arguing and went to investigate the building, and to their horror, saw TNT going off through the window, multiple other buildings were also on fire despite the fact that TNT and fire spreading was off. Soon, Speed opened up his computer and connected a cable from it to the Xbox that allowed him to open a program that could read the game's source codes, which described an entity labeled as "303".

After discovering of the entity's existence, the source codes began going out of control, spamming "303" and overwhelming Speed's computer. After the discovery, the host took this opportunity to troll the group, but was soon found out through the source codes. The source codes eventually spelled out "Make a Wish", and started revealing Entity 303's actions, which included him utilizing TNT and flint and steel for his crimes, leaving Speed to wonder if these were the actions of Herobrine.

After the host left the game and it shut down, the source codes were still active and Entity 303 was controlling the world. Speed exited the program and went to the forums to see if anyone else had spotted this mysterious entity, and many players responded, one revealing that he had been playing with friends and had taken a screenshot of a figure in the desert. Soon, an enigmatic profile messaged Speed and noted how Notch wouldn't believe his story if Speed tried to notify him, and that he was next. Upon clicking the user's page, the page 404', and Speed then received an inbox from the user, who was Entity 303. Upon asking what happened to Herobrine, Entity 303 claimed to have killed him and vows revenge on Notch for firing him. Speed's account then automatically signed out and was deleted.

Entity 303's biography has been adjusted over the course of the last few years, with the only detail that remained the same is his unfortunate departure from Mojang and his real name of John Entity.

Entity 303's current origin story instead takes place within the Minecraft world and not the real world as a simple hacker, treating Minecraft as a reality, and revolves around John being born to two humble farmers in the town of Breachwood. John grew up as a troublesome kid in school that still strives to do good and impress his family, he was distressed when his cousin died when he was in high school, but always wondered about how he died. John's goal was to make a create a future for himself by working for Mojang, a company that helped to develop and add to the Minecraft world through unknown and magical means. John and his family, consisting of his parents and older brother Gordon then moved to Kingstone, but the town was quickly attacked by a terrorist group called the Red Rebels and John's parents perished in the ensuing attack. Months after their deaths, John applied at Mojang and met Steve, who went on to become his closest friend.

Soon after meeting Steve, Steve detailed the event which lead to their previous bug finder being fired, as he had discovered a diamond "unlike any other" and attempted to use it against Notch. John met Steve's wife, Amanda, and his daughter, Leslie, and was soon hired by Mojang within two weeks time to be their new bug fixer. Gordon then left for Grassland to become an architect and Notch welcomed John into Mojang. John instantly took a liking to his new job and was incredibly skilled at locating bugs and deleting them. Meanwhile, Notch had made a deal with the Elder King and released some of his power into an emerald which landed in John's backyard, while most of Mojang's employees, including John and Steve discussed their plans for the emerald if they gained its powers.

Steve went over to John's house and discovered the emerald in his backyard. Deciding that taking a bit of it wouldn't hurt, but it was too powerful for him to absorb, and he then planned to steal the diamond from the Mojang office. John was against the idea and Steve's plan was put into action the next day. Steve managed to take the diamond and was teleported away as John followed and tried to stop him, but was then suspected of taking if when he landed beneath the office where the diamond used to be. Notch quickly fired him and John was informed by a man named Mitch that he had one day left in his house before he was kicked out due to his his allegations against Mojang. After Mitch left, John discovered the emerald in his backyard and decided to use its powers for good, successfully absorbing it, but it's side effects caused his skin to mutate turn completely black, and he was forced to hide in a white parka. He wrote a letter to his brother and Notch was informed that someone had retrieved the emerald.

Steve then met John's brother Gordon, but his home was quickly attacked by the Red Rebels and Gordon was assassinated in front of Steve, pushing him to use his powers and kill them instantly. A report was then sent to John informing him that Gordon had been murdered by the Red Rebels, and his sanity finally slipped, turning against Steve completely and murdering Mitch, who he had lured into the house and renaming himself as Entity 303, while Steve would go on to fight John, taking the name "Herobrine".

Entity 303 is vaguely given a description in the original stories, in which he is described as a cruel, tricky, ruthless, sadistic, cunning, and cold-blooded sociopath who relished in mentally tormenting his victims. He was not afraid of making himself known to the internet, unlike Herobrine in his original story, and even threatened to consume children outside of their parents' windows, spitting out their bones. He is repulsive, unpleasant, and barbarically homicidal and filled with murderous intent, and loved to see the struggles of his victims, whether it be his destruction of Minecraft worlds or the mental breaking of his victims, he loved to kill and was seen by those who encountered him as a maniacal madman and demented mass murderer.

Although it's not shown very often to those he chooses to target, Entity 303 has a rather high view of himself and was quite full of himself, arrogant, and egocentric. Entity 303 would declare himself to be "the new Herobrine" and insult him, one time calling him a "pathetic teddy bear" that wasn't scary even with his white, emotionless eyes. Entity 303 is also incredibly determined in his goals to kill Herobrine and take revenge on Mojang for ruining him.

Even though Entity 303 was an insane maniac, as John, he was a troubled and insecure young man who only wanted to make a bright and happy future for himself and keep his family safe, which he was willing to do after his parents' died. John felt incredibly betrayed by Steve when he indirectly got him fired from Mojang and invited Gordon to his house which lead to his death, and swore to take revenge on Steve to being one of the causes of his spiral to madness. 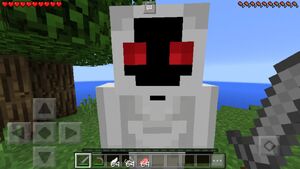 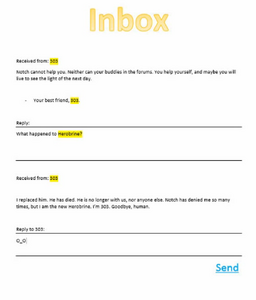 The email Speed received from Entity 303. 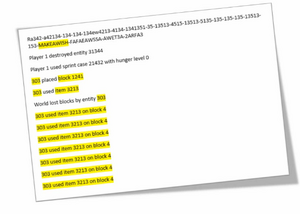 The source code revealing Entity 303's actions.
Add a photo to this gallery

Retrieved from "https://villainsfanon.fandom.com/wiki/Entity_303?oldid=201168"
Community content is available under CC-BY-SA unless otherwise noted.