Evil Kermit appear when Kermit and Jay are togheter and Kermit decide to call his evil twin, of course it work and the evil twin was about to come, but Jay decide to go out and go to a friend's house for the night, Kermit try to convince Jay to stay with him , but he leave and Kermit is now alone, as he try to hide like Jay told him the Evil Kermit found him when he sees that he try to hide and pursues him as he finally catch him and send him to the mirror world.

He then also appear in the stranger challenge when he trick Jay that he love doing scary challenge, he also forced Jay to do it alone without him pretended to be finally scared, he also appear in the voodoo video where Jay is about to do a voodoo doll of him, as he go to the kitchen, but Jean then come and warn Jay that the Kermit who he's doing these challenge is not the real Kermit who still in the doppelgangers world, it seem that some subscribers wasn't fooled neither since they try to tell Jay to save Kermit before something bad happen to him since all doppelgagers are in the mirror world and would find him, Jay tried to force the Evil Kermit to call the real one, he refuse they use the voodoo doll on him by hurting him, but he still refuse, they had no choice to burn the voodoo doll that make him decide to call the real Kermit, after it Jean capture him as they fight the evil  kermit fight to escape , but Jean fight to lock him in the box as they still fighting Jay go see if Kermit is free and see that the real Kermit is free without being caught by the other Doppelgangers.

He appear for the last time in a cutting episode since Jay subscribers decide that he should cut him wich Kermit Jean and Jay agree after he tried to trick evryone, he try to get out the trunk wich he succeed to open it , but Jean retrain him as they knock him out and put him on the table, he waking up by screaming something to not hurt his babies as Jay knock him out again this time he was dead and Jay cut him to his and Jean surprise some eggs came out and one of them already hatched revealing a baby frog, wich will later being called Echoe. 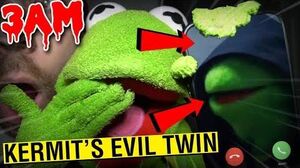 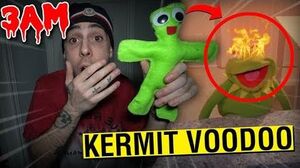 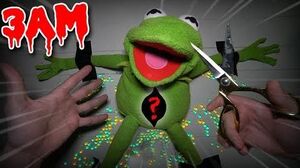 (SCARY) CUTTING OPEN EVIL KERMIT THE FROG AT 3AM!! *WHAT'S INSIDE KERMIT THE FROG*
Add a photo to this gallery
Retrieved from "https://villainsfanon.fandom.com/wiki/Evil_Kermit_The_Frog?oldid=110179"
Community content is available under CC-BY-SA unless otherwise noted.