Possess Sonic and kill all of his friends (mostly succeeded).

Conquer Mobius and save it from being erased by the Highests (ongoing).
Protect Rosy from Sark (determinant, succeeded).

Exetior (also known as Sonic.exe) is the titular main antagonist of the Sonic.exe: Nightmare Version series of fan games created by JaizKoys.

He is a ruthless, powerful arch-demon who escaped from Hell and possessed Sonic the Hedgehog, embarking on a mission to overrun Mobius with demons and protect it from the Highests.

He is voiced by the series' creator JaizKoys.

Exetior's early life is still a mystery, although what is known is that he was originally one of the Highests, which were cosmic entities which created life on Mobius. A regular occurrence for the Highests would be erasing Mobius and re-creating it, the first time Exetior erased Mobius, he felt absolutely nothing, but over time with each erasure, Exetior became more and more attached to Mobius and it's inhabitants, but tried to hide it.

In an attempt to stop the endless series of erasures, Exetior disguised as a demon of sharpness and went down to Mobius to learn about it inhabitants and build of an army of demons. Along the way, he befriended a demon of waves named Negagen. However, Exetior later started a war with the Highests after being exposed, but was backed up by Sark and Pervision, as well as Negagen. Exetior lost the war and was stripped of his powers and banished to Hell, turning him into a demon of sharpness. Four thousand years later Exetior would break out of his prison due to outbursts from the Master Emerald, he escaped, being pursued by the guards of Hell and heading to Mobius, he found Sonic the Hedgehog and copied his appearance to hide out in his body.

Exetior tried to possess Sonic, but was unable to because it was protected by Creep. Creep told Exetior that Sonic's strong will made it difficult for him to be possessed. However if he three main parts of determination were destroyed (Tails, Knuckles and Eggman), it would leave him powerless and possessable. Exetior agreed to this choice and temporarily possessed Sonic's body.

After Fatal Fog is beaten, Tails, Knuckles, Dr. Eggman, and Metal Sonic attempt to take refuge inside the Hidden Palace, however Exetior will catch up to them. In Sonic's mind, Sonic is able to locate Exetior and defeat him. With Exetior weakened, Metal Sonic places Sonic's body on top of the Master Emerald and it destroys Exetior.

Very similar to the Best Ending, however, if the player doesn't manage to hit Exetior 15 times, Exetior will weigh Sonic down from escaping Destroyed Mind, making it nearly impossible to escape. Knuckles mentions how they do run the risk of obliterating Sonic's mind, as he cannot handle the power of the Master Emerald, and his prediction comes true when Sonic falls to the floor, lifeless. However, Sonic's soul lives.

If the black rings are not collected and Tails enters Deadly Fog first, Exetior will spin attack Dr. Eggman and Knuckles, but Tails dodges him. Exetior will attempt to attack Tails again, but the fox dodges again, this time, Exetior will be impaled by a spike. Exetior will taunt Tails, saying how he's killed all of Sonic's friends like they were nothing, and Tails spindashes him down, killing Sonic and ejecting Exetior from his body. After the credits, Tails is flying as Sonic's soul appears in front of him.

If the black rings are not collected and Knuckles enters Deadly Fog first, Exetior will spin attack Dr. Eggman, followed by Tails. He comes back around for Knuckles, but he blocks it. Exetior and Knuckles exchange taunts and Exetior throws Knuckles backward with immense power. Exetior asks Knuckles if he has any last words, and he responds with, "See you in Hell" and decapitates the demonic hedgehog, killing Sonic and freeing Exetior from his body. After the credits, Knuckles will meet up with Sally, Amy, and Cream.

If the black rings are not collected and Eggman enters Deadly Fog first, Exetior will land on top of Knuckles and start beating him up, he then grabs Tails and throws him into the spikes. Eggman tries to escape, but Exetior catches up to him first, but Metal Sonic tazes him. Eggman will talk about how he was always defeated, but then asks Sonic "who really is evil?" and has Metal Sonic snap his neck, killing Sonic and letting Exetior escape his body. After the credits, Eggman says that the thought of taking over the world with robotics is not very appealing to him anymore.

The canon ending of the game where none of the cast are saved. Sonic will end up in the level Suicide Hill and trudges by the corpses of Tails, Knuckles, and Eggman, then there will be a bed of spikes. If Sonic chooses not too, the souls of Tails and Knuckles appear to give Sonic confidence, then Exetior, appears with the corrupted Tails and Knuckles are riding the tornado, as they foreshadow Sally.exe: Continued Nightmare - Eye of Three.

This ending is achieved when you run out of lives in Destroyed Mind, prompting Exetior to kill Sonic's friends and harness the Master Emerald's power.

If Sonic chooses to end his life in the bad ending, he will jump on the bed of spikes in front of him.

Exetior once again appears as the main antagonist of the sequel. The sequel shows more of Exetior's daily life in his lair and the treatment of his servants, whilst also revealing his motives and sending out his minions to kill Amy, Cream and Sally. After capturing the three girls, Exetior sends them into a simulation to torment them.

In the worst ending, Exetior plays a minor role as he sits outside his lair with Knuckles and Tails. After Knuckles pushes Tails away, Exetior is approached by Amy, Cream and Sally, fully demonized and under his control as he smiles wickedly.

After Sally tricks Amy into killing Cream, she kills Amy herself as they both disappear. Sally then gets a call from Exetior, congratulating her on her victory whilst simultaneously taunting her. Exetior tells Sally to prepare an apology gift for the two when they are resurrected and hangs up the call.

After killing Sally and Amy, Cream gets a call from Exetior, acting nicer to her and praising her successful efforts, he then tells her that she will soon see her friends again.

After killing Cream and Sally, Amy gets a call from Exetior congratulating her on her successful mission. He tells her to come back to the base to watch the demonization process and asks her who to demonize first, to which Amy responds by picking Cream. Exetior complies and hangs up.

Sally arrives at Exetior's main area at his lair where he sees her demonized friends being guided by Exetior. Exetior then says that his work will be easier as Amy and Cream jump down and kill Sally.

Exetior reveals that Tails had killed Vanilla out of rage and that she is unable to be demonized. Exetior is about to start the demonization ritual when a Highest seemingly possesses Exetior for a few seconds, making the cages the girls are in vanish and letting them escape.

Exetior has a minor, yet pivotal role in the true ending, as after the girls escape his lair he is seen by Amy, Cream and Sally (who is possessed by the Highest "Stich-Lite") sitting defeated next to an unconscious Negagen. In front of him is his co-worker Sark, who utters "Now die..."

If none of the girls survive, Sonic will be fueled by his determination inside his mind and turn into his fleetway form, attempting to kill Exetior. Exetior tries to relay the facts that he is only trying to save Mobius, but Sonic doesn't believe him. This can lead to two different outcomes.

Exetior plays a minor role in the "Betray-Tion" ending. Exetior talks to Knuckles through a screen about Amy's behavior and revealing that she had killed Cream due to Negagen's illusions, he gets worried about Negagen not returning, unaware that Amy killed him out of rage. He orders Knuckles to have Cream kill Amy so she would be more compelled to join them. After Amy is killed, the final image of the game shows Exetior and Knuckles standing in front of the demonized girls, with calm smiles on their faces.

In the fan-titled "Madness" ending, Sally is affected by the Eye and enters a delusional state, believing she has killed the negative-state Amy. Exetior orders Knuckles to check on the girls' state until Sally slides in and cuts Knuckles in half. She demands to meet Exetior in person so she can kill him, and Exetior tricks her after she comes into contact with him. She's teleported to another location and chased by her demonized friends until she is restrained and locked away. Exetior notes on her current state and that she may not ever be cured of the Eye's control.

In the "Ex-Aitor" ending, Exetior enters Sonic's mind to find Creep with his mask off, he tells Exetior that it's a trap as Stich-Lite appears in the form of Sally. Exetior runs as he sends a brainwashed Sonic, Amy and Cream after him, all the while Exetior is apologizing to Mobius and Sonic, promising to avenge them as the Stich-Lite erases Mobius and everything on the planet from existence. Exetior manages to escape and utters "I'm sorry, Mobius."

Exetior appears in a secret involving him taking in Sark's Amy (Rosy) due to Sark's torturous and abusive nature towards his servants. He instructs the girls to keep Rosy company while he attends to a meeting with Exeller. After his meeting he meets Rosy again, who starts flirting with him. Exetior attempts to deny these feelings and notes how she should be going back home. Exetior later returns to save Rosy from being tortured by Sark, starting Sark's hatred for the demon he thought was his friend.

Another secret involves Exetior dealing with Tails murdering Vanilla in a barbaric way prior to the girls waking up. Tails' murder leaves Vanilla unable to be demonized. Exetior scolds him for his foolishness but forgives him, and start to think about Amy and Sally's feelings towards each other. He also reveals the "Eye" is a program designed by Eggman to be the girls' weakness in their living state. 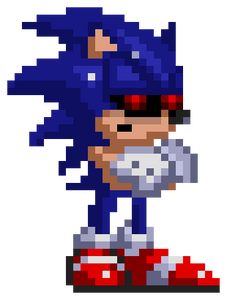 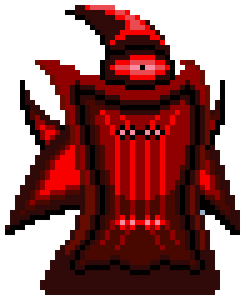 Exetior in the form of Paramount Sonic 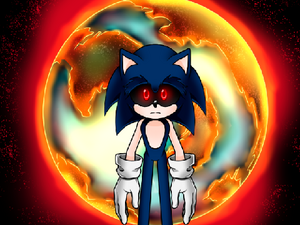 Retrieved from "https://villainsfanon.fandom.com/wiki/Exetior_(Nightmare_Version)?oldid=149948"
Community content is available under CC-BY-SA unless otherwise noted.