Can turn people into Bootlegs

Take revenge on the real-world population by turning them into Bootlegs and making them suffer the same pain he and the other Bootlegs suffered.

Take over the real-world by turning it into a new Bootleg world.
Kill Mario (all failed).

Grand Dad (also known as Bootleg Mario in the Grand Mario Hotel) Is the hidden main antagonist of SMG4's YouTube video SMG4: THE BOOTLEG DIMENSION. He was a being from a 2D dimension called "Bootleg Dimension". The Bootleg Dimension is the consequence of one of Professor E. Gadd's failed experiences, he tried to create a new magical painting like the others around Peach's Castle, but with his failure, the painting glitched and became a portal to this dimension where all the population is deformed, crazy, uncomfortable and painful. There was where Grand Dad was born.

Grand Dad is first seen when Mario purposely entered in E. Gadd's glitched painting, surprised and scared of everything he sees, Grand Dad then get out of an little castle, welcoming Mario to his dimension. When Mario said he entered through a portal, he said he was stuck into his dimension and begged to lead him to the Real-World where everything is in 3D and thought it could be less painful for him and followed Mario out of the glitched "portal" painting.

Both then jumped out of the painting and from the Bootleg Dimension, Grand Dad looked happy with his new 3D appearance and the beautiful landscape, the "new" world he was seeing for the first time. Mario entered in the castle with Grand Dad and presented him to Toad. When Grand Dad was about to greet Toad, he accidentally transformed him in a crazy and deformed Bootleg, Mario and Grand Dad found it fun, both had the idea of going out and turn everyone around Mushroom Kingdom into Bootlegs. Everyone around them.

After having fun turning the people around Mushroom Kingdom into Bootlegs, Mario asked Grand Dad if he could turn them back to normal... but not everything seemed to be just for fun (at least not for Grand Dad). He reveals himself and his true goals to Mario about taking revenge on the real-world (normal) people for how he and all the other Bootlegs suffered the pain of being tortured by the way they look, and wanted to make them feel the same pain. Then Grand Dad left Mario alone and started turning everyone else into Bootlegs, starting his rebellion.

Into The New Bootleg World

After leaving Mario, Grand Dad went back near to Peach's castle and, with a punch on the ground, he made the whole place around have a graphic like the Bootleg Dimension, making the hills, the castle walls and the sky like a glitchy game screen, also he kept turning madly the population into Bootlegs. Mario got to be the only one who can defeat him and save the world, the Mushroom Kingdom and it's people. Grand Dad was using all his power and turning more and more people into Bootlegs, ahead with his plan of revenge. But with he floating above the castle, Mario is supposed to get on the roof to stop him, the easiest way is by being launched to the top with the cannon near the lake, but it was destroyed when he turned a bob-omb that the Toads tried to throw at him into a "Bootleg bomb", that fell down near it, difficulting Mario's mission.

Mario Vs. Grand Dad and Defeat

Then Mario entered in the castle, ran away from the "Bootlegs Pookachus" running after him and reached in the castle's roof. Grand Dad found Mario and attempted to turn him into a Bootleg too, he made Mario with a giant beard and with a hunchback body, but Mario didn't feel that bad like the others, he said feeling comfortable with his deformed body, then Grand Dad got angry and ran after Mario attempting to kill him, but Mario slapped him in the face 1 million times.

With 1 million slaps Grand Dad got injured and week, then Mario attempted to throw him at first to the glitched paint, Grand Dad said him to stop because all he wanted was the Bootlegs to be loved, because they all were too sad and anyone can't understand their sadness and all that stuff (of course he was lying), Mario also makes fun of him saying he had to take out the garbage and he punched him, throwing him back into the glitched paint.

Grand Dad is last seen when he turns back to his 2D form saying good-bye to the real-world and disappeared in an explosion. To get the real-world back to normal, also to make sure Grand Dad would never return, Mario uses a Bootleg bomb to destroy the glitched painting, thus killing Grand Dad and erasing the Bootleg Dimension from existence once and for all. 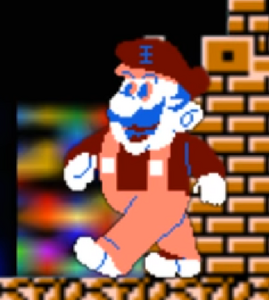 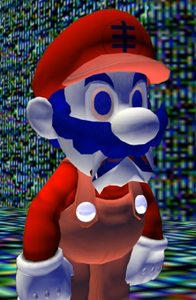 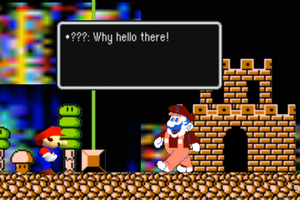 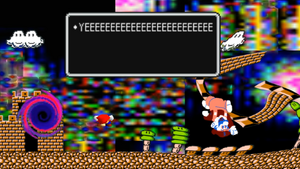 Grand Dad getting out of Bootleg Dimension 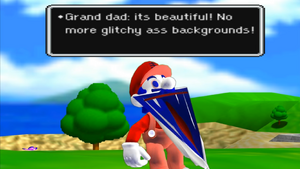 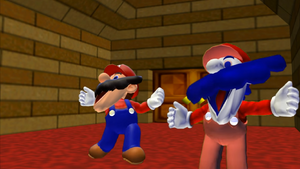 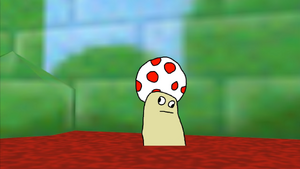 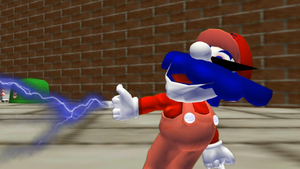 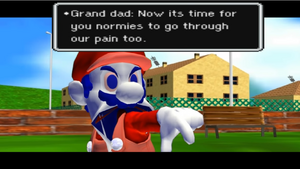 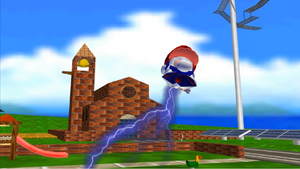 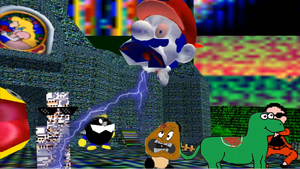 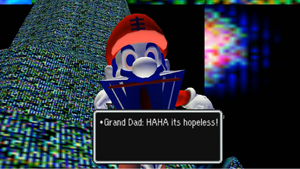 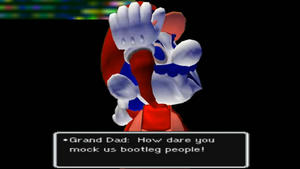 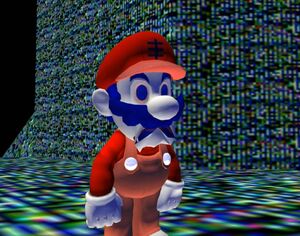 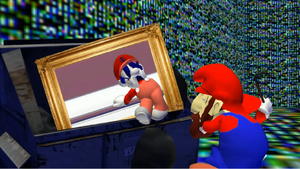 Grand Dad pushed into the painting

Mario destroyes the glitched painting, finishing with the Bootleg Dimension
Add a photo to this gallery
Retrieved from "https://villainsfanon.fandom.com/wiki/Grand_Dad_(SMG4)?oldid=132014"
Community content is available under CC-BY-SA unless otherwise noted.