Age of Equestria: The Return of Tambelon

Master of Necromancy
Leader of the Dark Alliance

Ruling the city of Tambelon

Avenge the death of his wife (succeeded)

When Grogar was a lamb, he was raised by his family in the City of Tambelon and he was gifted with an enchanted bell that can give him magic similar to that of a unicorn before he fled to the Enchanted Forest when the City of Tambelon was attacked by invaders. When he met Starswirl, he was brought to his mentor, Avalor the Wise, before the two of them became best friends. After years of studying magic under the supervision of their master, Grogar and Starswirl became inseparable and they left the Enchanted Forest to go exploring at Mt. Everhoof where they found a Draconequus egg before they took it into a safe place before it hatched. After the egg hatched, Grogar and Starswirl decided to adopt it as their brother and ward before naming it Discord. When they finally reached adulthood, Starswirl became known as Starswirl the Bearded before he and Grogar decided to bid each other farewell as they part ways to find their own destinies. Grogar takes Discord with him before he returns to the city of Tambelon, only to find it damaged and leaderless. One of the last remaining residences starts to recognize Grogar as the lost son of the Emperor and Empress of Tambelon before they decided to ask him to become the new ruler and Emperor of Tambelon and help his people by rebuilding the city to which he did with the help of Discord's magic. When Grogar asks what happened to his parents, the citizens of Tambelon explained that they died trying to protect the city because they were killed by ponies. Grogar is shocked for he learned that his family was slaughtered by Starswirl's kind. After calming down from his anger towards the ponies who attacked his home, Grogar decides to let it go and accept the fact that not all ponies are evil. After the founding of Equestria and the arrival of the Two Sisters, Starswirl decided to find Grogar and have a friendly reunion with him.

My Little Pony: The Lost Prince

Grogar went to the Kingdom of Midnight where King Vorak asked him for a miracle that could prevent his wife, Queen Haydon, from dying of childbirth. Grogar created a potion with his magic that not only helped Queen Haydon successfully give birth to Tirek, but it also resulted in giving Tirek magical abilities and the ability to steal magic from others. King Vorak was furious that Grogar laid a curse on his firstborn child and Grogar tried to explain before he offered to be Tirek's godfather, but when King Vorak and Queen Haydon refused him, they banished him back to the City of Tambelon. Many years later, Grogar had been exiled by Avalor the Wise after Gusty the Great and Starswirl the Bearded exposed him for his crimes of treason, murder, kidnapping, and practicing the forbidden arts of Necromancy in front of every citizen in Tambelon. During his exile, Grogar went into hiding inside the caverns at a desert with his adopted daughters, Adagio Dazzle, Sonata Dusk, and Aria Blaze, before he used a crystal ball to spy on Tirek. Grogar watched as Tirek grew older and he noticed how he was jealous of his brother, Scorpan, and how he was power-hungry and that wanted to learn how to absorb Equestrian magic. When King Vorak chose Scorpan to become the future king of the Kingdom of Midnight, Tirek was furious and Grogar decided to sneak into the kingdom to convince the jealous prince to run away from home. When Grogar lured Tirek away from the Kingdom of Midnight and brought him far off into the wilderness at the Neather Lands, Tirek almost got himself captured by slave drivers and he almost got himself killed by a giant scorpion. Luckily, Grogar managed to save Tirek with his magic before he brought the unconscious centaur to his lair where he mended his wounds for three days until Tirek woke up. Grogar gave Tirek something to eat and he introduced him to the Three Sirens before he explained to Tirek about how he got his powers. Grogar asks Tirek to become his apprentice to which Tirek refuses at first, but then he accepts Grogar's proposal to join him before Grogar taught Tirek how to control his magical abilities as well as how to absorb magic from others just like he always wanted to. When Tirek reached adulthood and his training was complete, Grogar brought his prodigy to the lair of the Cult of Erebus the God of Tartarus so that he can baptize him in the Well of Souls so that Tirek will become immortal. When King Vorak attacked Grogar, Grogar told Tirek to make a choice: to either go back to the Kingdom of Midnight with his father or to kill his father in order to save his master. Tirek chose to kill his own father by letting him fall to his death before Grogar and Tirek went to the Well of Souls. After a while, Grogar promised Tirek that he will gain ultimate power and that he would rule the world by his side. Then Grogar ordered Tirek to force his own brother, Scorpan, to work for him so that he can absorb the magic of every Pegasus, Unicorn, and Earth Pony in order to become strong enough to obtain Alicorn magic and take over Equestria. Tirek did what his master told him to do as he forced Scorpan to work for him as his minion before Scorpan would eventually betray Tirek by informing Princess Celestia and Princess Luna about Tirek's threat to conquer all of Equestria. When Tirek got imprisoned into Tartarus for his crimes, Grogar pleaded to Erebus the God of Tartarus, but when he received no answer from the deity, Grogar decided to build his own army of the undead so that he can take his revenge on the ponies of Equestria for Tirek's defeat.

My Little Pony: Age of Equestria: The Return of Tambelon

Grogar made his first appearance in the prologue where he once tried to dominate the land of Equestria before he was imprisoned by Starswirl the Bearded and the Pillars. Thousands of years later, he was eventually freed from his own imprisonment by convincing Bray to do his bidding. Then Grogar would eventually recruit some of the villains that Twilight Sparkle and her friends have previously defeated in the past, thus creating his league of villains named, The Dark Alliance, before Grogar and his followers would plan on destroying Equestria as well as pony-kind. Grogar sent Lord Tirek and the Dazzlings to rob the ponies of their magic before influencing them to turn against each other in order for the Windigos to return. The Storm King and Queen Chrysalis led Grogar’s army of the undead to invade the Changeling Hive and to prevent Princess Celestia and Princess Luna from gathering reinforcements to protect Equestria while King Sombra and the Umbrum took over the Crystal Empire. Cozy Glow had been turned into a demon as a result of being transformed by The Rainbow of Darkness which was given to Lord Tirek by Grogar himself while Bray was loyal onto Grogar. Eventually, Grogar and his followers destroyed the Tree of Harmony in order for the Elements of Harmony to become useless for Twilight and her friends. When Twilight Sparkle and her friends finally made it to Tambelon, they were overwhelmed by The Dark Alliance before they eventually found a way to ring the Bell of Freedom in order to destroy the source of Grogar’s powers. Courageous Heart helped Twilight Sparkle and all of their friends defeat The Dark Alliance and break out of the dungeon before they used the Ultimate Power of Friendship to ring the Bell of Freedom, thus destroying Grogar’s bewitching bell which caused Grogar to lose all of his demonic powers as well as his immortality and he as quickly disintegrated in the process.

My Little Pony: Age of Equestria 2: A New Generation

Grogar had been condemned in the depths of Tartarus for his villainy before he would eventually come back as a ghost to influence what’s left of his followers to do his bidding by finding a way to resurrect him. Grogar would sometimes haunt the ponies of Equestria in their sleep, making it impossible for Princess Luna to solve any of their nightmares in the Dream Realm. When Megan Williams came to the world of Equestria, Lord Tirek asked his master what kind of creature she was and Grogar explains to him that Megan is a human being from a different dimension. Grogar orders Tirek and his Legion of Doom to finish what they started years ago by taking revenge upon Twilight Sparkle and her friends. Each time Tirek would hire one of his minions to make life miserable for the heroes of Equestria and each time Megan Williams will use her Rainbow of Light to stop them. In the end, Grogar tells Tirek that he should be able to resurrect him by using the Book of the Dead. When Tirek’s minions were able to acquire it, the Book of the Dead tells Tirek that in order for him to resurrect Grogar, he has to bring forth everlasting night by building his own Chariot of Midnight and by using his Rainbow of Darkness to turn four ponies into monsters for his chariot so that he can ride off into the night sky and make the night last forever and when the world has been covered in darkness, this will cause the demons of Tartarus to roam free and Grogar would be resurrected in the process. But when Megan Williams uses the Rainbow of Light to defeat Tirek, she convinces him to change his ways because Grogar only intended to use him as an instrument of evil. When Tirek accepts Megan’s friendship, this makes Grogar furious before Erebus the God of Tartarus drags him back down into the Abyss for him to pay for trying to destroy Equestria again.

Emperor Grogar is pure evil, ruthless, hot-headed and charismatic. He gets angry when any pony or creature stands in his way. He also gets impatient at times when he doesn't have his way. He even flies in a murderous rage when he is being oppressed or threatened. Before his transformation, he was a kind, gentle, intelligent and brave ram until the loss of his beloved wife drove him into madness. Due to his passionate hatred towards ponies, whether they'd be of Pegasi, Earth Pony, Unicorn, Alicorn, etc., Grogar can be very xenophobic. He delights in the pain and misfortune of others because he is both soulless and heartless. Grogar is also power-hungry and ambitious with his plans to destroy Equestria so that he could expand his empire with Tambelon as its capital. He treats his enemies with punishment and cruelty without any remorse whatsoever while he treats his friends like they're his loyal followers as long as they don't plan on betraying him. Whenever he sheds innocent blood on whether they'd be from ponies or creatures, he feels delighted with his carnage. 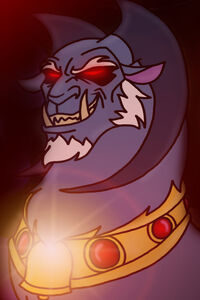 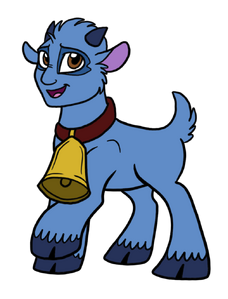 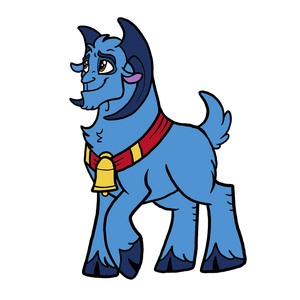 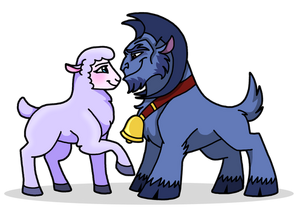 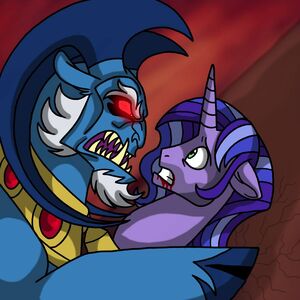 Grogar getting revenge on his wife's killer, Vesper Shine 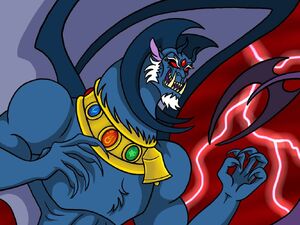 Grogar in his Titan form 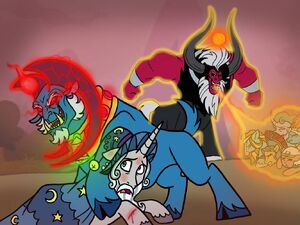 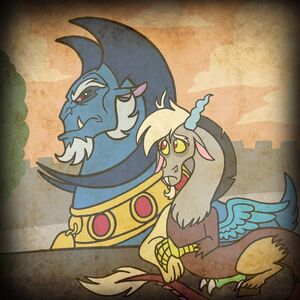 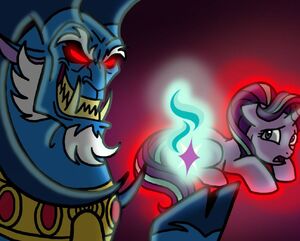 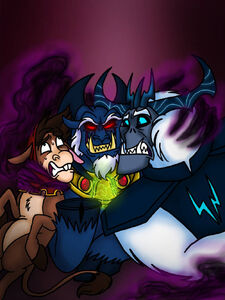 Emperor Grogar with Bray and The Storm King 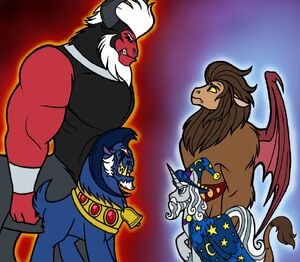 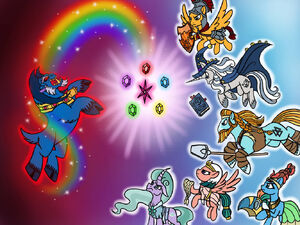 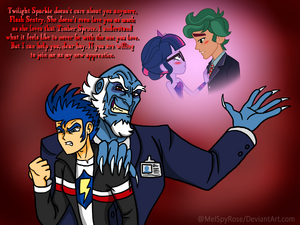 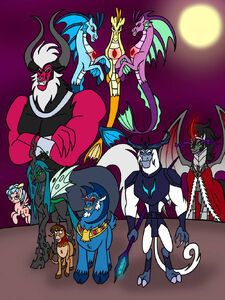 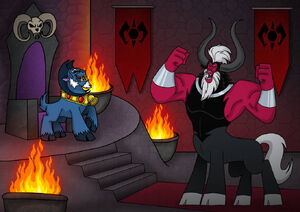 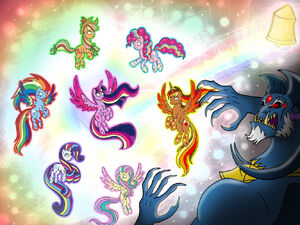 Twilight and her friends destroy Grogar 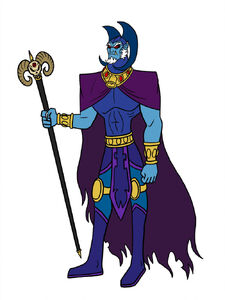 Grogar in his human form 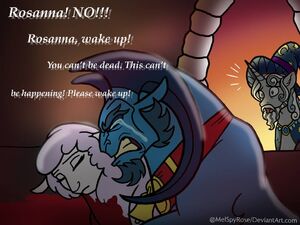 Grogar mourning the death of his wife, Rosanna 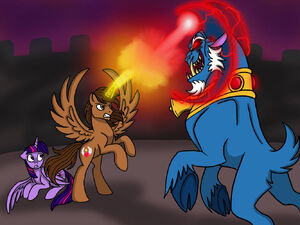 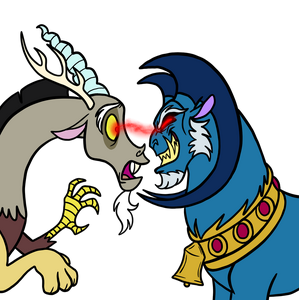 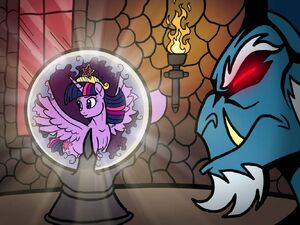 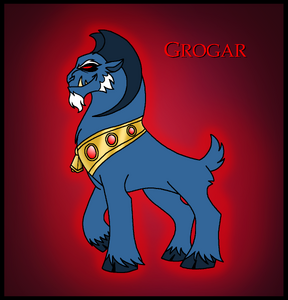 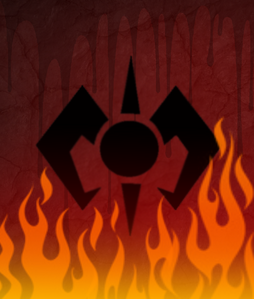 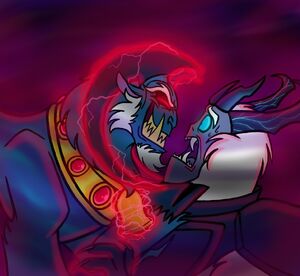 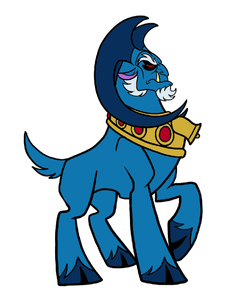 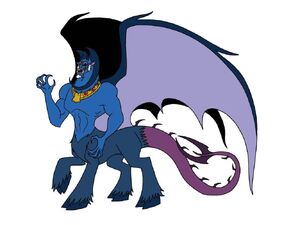 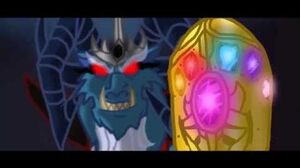 Grogar's Theme Song
Add a photo to this gallery

Retrieved from "https://villainsfanon.fandom.com/wiki/Grogar?oldid=131934"
Community content is available under CC-BY-SA unless otherwise noted.