Kill Steve and the Pig (failed).

Archenemy
Herobrine is the main antagonist of the YouTuber Slamacow's original Minecraft song "Cube Land". He is Steve's nemesis and plans on sending the hostile mobs to kill him.

The video starts with Steve walking towards his home after an unseen fight with some mobs, before he enters his house he looks behind him along with his pet pig and sees Herobrine lift his head up and directly look into his counterpart's eyes. Steve panics and runs, but Herobrine uses lightning to resurrect the dead mobs who then go after Steve and his pig.

Steve crafts an iron helmet for his pig and and a sword for himself, prepared to face the monsters, starting with a few zombies coming in from the entrance. He heads to another part of his house and finds unfinished plans for an escape route in case of an invasion.

All of a sudden multiple mobs storm the room and hunt for Steve, he takes them out with the help of his pig, who saves him from an exploding creeper before they head out for their main adversary; Herobrine.

Steve and the pig go outside and confront Herobrine, who rushes at Steve and pins him by the neck to a tree, twitching at the same time. The pig arrives and rams Herobrine to the side, but is injured, he stares down at the animal before getting impaled through the back with Steve's sword. Herobrine starts to twitch violently and seemingly disappears to the outskirts of Minecraft's code, leaving Steve alive.

The video ends with the Miencraft menu showing "Removed Herobrine" in the chain of updates.

Herobrine is quiet, calculating and mysterious, he seemingly appears from nowhere just to cause chaos for the fun of it and doesn't play around. A true brute, he is violent and unrelenting, going out of his way to bring Steve's enemies back to life to torment him.

Herobrine is able to resurrect dead mobs back to life, seemingly under his control. He is also quite intelligent and brutal, easily beating Steve to the beginning of their final showdown. 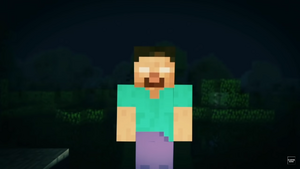 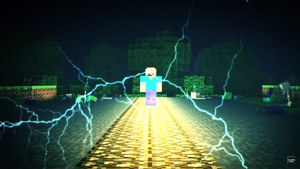 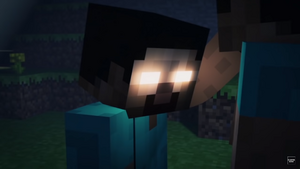 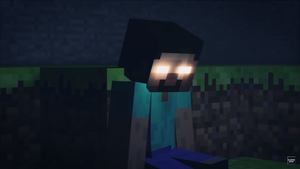 Herobrine is kicked away by the pig. 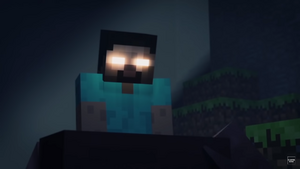 Herobrine prepares to kill the pig. 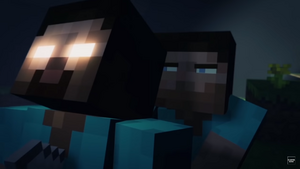 Herobrine is fatally stabbed by Steve. 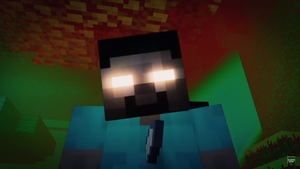 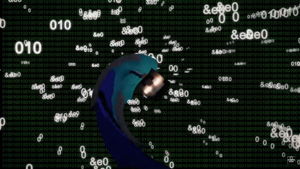 Herobrine's defeat.
Add a photo to this gallery 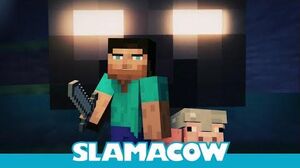 Retrieved from "https://villainsfanon.fandom.com/wiki/Herobrine_(Cube_Land)?oldid=117911"
Community content is available under CC-BY-SA unless otherwise noted.