Chancellor of the German Third Reich

Tempting people to play his game.

Many years after World War II ended, a group of Satanist Neo Nazis and Communist ISIS terrorists performed a ritual to summon the spirit of Adolf Hitler by slaughtering 1000 baby goats in a way that was not Kosher. The soul of Hitler searched for a vessel to inhabit and eventually decided on a GameBoy cartridge for the game Pokemon: Yellow.

The game initially sat in a storage box until it was dug up by a young woman named Clarissa. Clarissa wanted to sell the game on eBay but decided to play it again. She put the game inside her old GameBoy and turned it on, only for a series of Satanic symbols to appear as the title screen for the game appeared. However, Clarissa merely assumed it to be a glitch so she took out the cartridge and blew on it before putting it back in.

When she booted up the game again, everything seemed normal as she began the game until she got to Professor Oak, whose sprite had been edited to look like a Nazi SS Officer and also had super demonic eyes. Dr. Oak told her that the Pokemon world had become impure by the presence of gave her a Pikachu as her starter and told her to go round up all of the inferior Pokemon types.

And so, Clarissa played through the Pokemon game, and everything was normal until she beat the Elite Four. After she did that, a cutscene suddenly began playing in hyper-realistic 3D graphics showing a group of non-electric type Pokemon being herded into a death camp and gassed by several Pikachus dressed like Nazis. Clarissa let out a cry of shock and terror but before she could do anything a super duper hyperrealistic 4 dimensional Pikachu face resembling Adolf Hitler suddenly flashed onscreen and began laughing like Exdeath from Final Fantasy XIIII I think and giving a speech in German as lots of blood began to ooze out of the Game Boy. Clarissa tried to set the GameBoy down was too paralyzed by how startled she was to move. When her parents came home and went to the garage there was nothing but a giant Pentagram written in blood with the words "666 Heil Hitlerchu God is dead and Satan is supreme also Undertale is overrated" written around it.

Hitlerchu is extremely evil and is defined by his extreme hatred of all non-electric type Pokemon, believing in the supremacy of all electric type Pokemon, more specifically Pikachus, over all other forms of life. He is extremely charismatic, being able to entice people to play his game. Like the original Hitler, Hitlerchu desires nothing less than the complete extermination of all beings he sees as inferior from the planet and to construct a global dictatorship where he reigns supreme and is able to do whatever he wants.

Hitlerchu is also a very sadistic psychopath who takes pleasure in tormenting others just for fun, like torturing children for the lulz. He also takes pleasure in luring people into playing his game and corrupting them to exterminate non-electric Pokemon for him.

Hitlerchu has complete control of the world within the Pokemon game he possesses, and is able to warp it and anyone who plays it to his will. 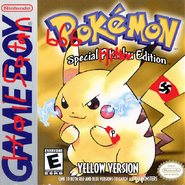 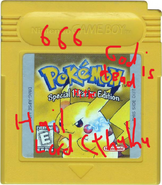 The Hitlerchu.3rdReich game cartridge
Add a photo to this gallery

Retrieved from "https://villainsfanon.fandom.com/wiki/Hitlerchu.3rdReich?oldid=132454"
Community content is available under CC-BY-SA unless otherwise noted.