The Joker
Mr. J. (by Harlene Quinzell)
The Jokester
Pathetic Clown (by Jim Gordon)
The Saviour of Gotham
Dr. Voleski

To kill Jim Gordon or drive him mad as a punishment for his "corruption" and "lack of morals" (succeeded; he did kill Gordon but he had never managed to eat up his sanity)
To win Harley's heart and use her as his own beloved pet (succeeded)
To gain full access to The Wayne Enterprises so he could end corruption in the city of Gotham (succeeded, but later it ultimately backfired)
To finish his ultimate scientific project so he could destroy all of the corrupt people in Gotham and elsewhere (ongoing)
To drive Bruce Wayne mad and turn him into the insane maniac that he is (ongoing).

Judah Voleski, also known as Mr. J or The Jokester, is one of the two main antagonists (alongside Ra's al Ghul) of the DC based thriller TV series Wayne. He is the series' true incarnation of The Joker. Judah was at his first few moments a seemingly nice, wise, intelligent, caring and mentally stable teacher who befriended Bruce Wayne aka The Batman. That was all a twisted facade in order to gain Bruce's trust and acess to The Wayne Enterprises so he could either "fix" Jim Gordon or kill him for being the most corrupt cop in the city.

He is portrayed by Logan Shroyer in his first major villainous role.

He at first appears to be a science teacher at the South Gotham High School, as well as an independent scientist aside from his school duties. He was aware to the fact that the infected city mayor Aubrey James has lost his control as the laughing gas caused him to ravege the school and chase it's students. That was all part of Jasper's plans to sabotage him while Bruce aka The Batman fights against Aubrey and sends him to rehabilitation. Judah at first presents himself to Bruce. He is seemingly a kind, supportive, caring, wise and resoursful science teacher who is there for the good of the students and the school itself. Bruce Wayne recieves the information about the attacks and Aubrey's whereabouts at the school. As Bruce goes to the school's lobby and manages to defeat Aubrey and send him to be cured him at Arkham, Jasper and Harlene manage to kidnapp Judah and take him as their hostage to another room at The Arkham Asylum, with intentions to drive him insane. Jasper then phones Bruce and invites him to come and save Judah, as he expected Judah to be driven insane before Bruce arrives and rescues him. However, as Jasper revealed that he filled his RPG gun with laughing gas instead of ammo, he ordered Harlene to shoot the gas at Judah. Harlene however shot Jasper instead, thus revealing that she refilled the gun with ammo as Jasper did not notice. She calls him the pokester in order to tease him, and Jasper in his last breathe replies that he's not The Joker. As part of his pretentious plans, Judah offers Harlene help and asks her to recover for him so she can live a normal life. Bruce then arrives in order to rescue Judah, and asks Harlene if she is planning something, as Judah answers that she is really a good person in order to protect his girlfriend since the day they have first met at high school. Judah then asks Harley to give him some time to talk alone with Bruce. He then reveals to Bruce that he has been working on a project in order to research crime and stop corrupt liars and criminals from taking over the world. Bruce gives him access to Wayne Enterprises so he could work on his project at the Ace chemical plant. Judah sarcastically thanks Bruce, before revealing his motives and true colors. After Bruce goes home, he maniaclly laughs infront of Harley and reveals that he has not given up on his scheme yet. It's revealed that his nice and intelligent personality is only a facade in order to get permission to use The Wayne Enterprises as a weapon against "corruption". Therefore, he planned to kill Jasper in order to become the new, "better" Joker. He also reveals that he is planning to kidnap the most corrupt criminal of them all, Deputy Jim Gordon. He then invades the GCPD's station and enters the office where Jim awaits, after killing off some cops. He then points a gun at Gordon, and asks him where his morals are. Jim however replies that Judah is the one without any morals, as he is pointing a gun and acting like a rather pathetic clown. Judah then inherits the name of The Joker infront of Gordon, with intent to save the city from the GCPD and it's corruption. He knocks Gordon out and takes him captive to the Ace chemical plant. He ties Jim Gordon onto a rope and places him right above an acid tank. The Batman recieves a phone call from The Joker, and is asked to come and pick a side either with the jokeman of Gotham's criminal underworld or with the "corrupt officers who pretend to save the city". Batman arrives in his superhero uniform and attempts to talk some sense into Judah in order to prevent Gordon's death and mantain Judah as a friend. Judah however refuses to go to rehabilitation at Arkham, because he now believes that Wayne is betraying him and saving the corrupt people of Gotham from their "legal punishment". Judah then cuts the rope with his pocket knife and causes Jim to fall to his tragic death. Judah then unleashes his Joker persona and becomes fully insane as he laughs at Gordon's death. This causes the insanity to simply just eat him up. While Judah maniaclly laughs with a loud and happy tone and attitude, Batman gets angry and out of rage, he pushes the newborn clown prince of crime off the edge of the surface, thus causing him to fall straight into the acid which has killed Deputy Gordon. However, since Judah could resist any pain or injury, the acid ate up his flesh and brain, as the creepy version of The Joker would eventually crawl out of the acid bath. Judah later reunites with Harley Quinn and the two sociopaths confront a duo of criminal thieves. Judah orders Harley to shoot one of them, as the other (who happens to be a gang leader called Tom McCoy) is forced into agreeing to help Judah and Harlene with their plans to end Gotham's corrupt reign of terror and ultimately turn Batman to their side.

He then plots with Oswald Cobblepot to bring The Batman down and turn him into a mad supervillain. Harley eventually brings Bruce to Judah (after Zsasz shot him under The Penguin's orders) and Judah explained to Bruce that he planted bombs around the city. Selina however enters the scene and kills Harley Quinn. Later, Harvey Dent threatens Bruce with a "trial", in which he flips a coin and interrogates Bruce. However, Judah throws on him a bomb and disappears, as he has now created the injured supervillain Two-Face. 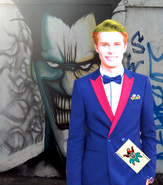 Links to the fanfilms

Retrieved from "https://villainsfanon.fandom.com/wiki/Judah_Voleski?oldid=134234"
Community content is available under CC-BY-SA unless otherwise noted.