Hanging out with Rosalina
Watching TV

Mario is the main protagonist in the SuperMarioLogan series. He is Jeffy's adoptive father, Rosalina's husband, Peach's ex-husband and Luigi's brother.

Despite being a protagonist, Mario is sometimes an antagonist.

He is voiced by the creator of the series, Logan Thirtyacre, who also voiced Bowser Junior, Waluigi and The Rat in the same YouTube series and Mario and the Grinch in Titototter. He was also voiced by Tito Jimenez in Jeffy's BIG Easter! and the 2017 Super Mario Got Milk video.

Mario is nice and responsible, but he can be frustrated, angry and irritable, especially when Jeffy annoys him.

Even though he gets angry with Jeffy in Jeffy's Parents!, he felt sorry for him and decided to adopt him because Jeffy's mother abuses him.

Mario is sometimes shown to have an evil and cruel side as he committed multiple villainous acts such as teaming up with the Pigs to kill the Angry Birds, helping Mama Luigi kill Toad, helping Bowser in a robbery, helping Brooklyn T. Guy, Simmons and Sharon steal a christmas tree, killing Pee-wee, hiring the Loan Dolphin to kill Jeffy, etc.

Houses he lived in

He lived with Black Yoshi, Shrek, Mama Luigi (before he died), Woody, Tony the Tiger, Mr. Pig and Toad in the original house where most of the SML characters used to live. He also lived with the Angry Birds in the same house until he kicked them out.

In October 2016, Mario lived in a new house after Wendy one of the Koopalings cut the couch in half with a chainsaw.

Fire Mario is a transformation of Mario in Mario's Turtle Problem! when he killed Pee-wee.

Wing Mario is a transformation of Mario when he uses the Wing Cap. He used it in a Mario and Luigi's stupid and dumb adventures episode.

Wing Mario was also used in the older SuperMarioLogan videos. 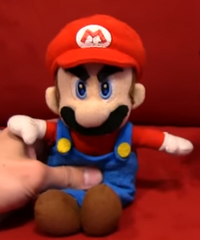 Mario (also known as Evil Mario) is an antagonist of SuperMarioLogan's 306th video of the SML movies, Jeffy Sneaks Out!. Just like his original counterpart, he was voiced by the series' creator Logan Thirtyacre.

He was seen in Jeffy's mind when he was doing an evil laugh with Rosalina and then Jeffy wanted to tell them something and Mario and Rosalina asked Jeffy what he wants and Jeffy said he wants to see a movie and they asked him about the movie and Jeffy said yes but then Mario interrupts him and said that he and Rosalina don't allow fun in the house and then they both asked him if Jeffy did some things that he was supposed to do. Mario accused Jeffy of raising his voice back at him and Rosalina. Then Mario told Rosalina to get the belt. After that, Mario said that it is against the rules to ask about fun and then he hit Jeffy with the belt and Jeffy starts screaming and Mario and Rosalina were doing an evil laugh.

Mario did not actually abuse Jeffy with the belt, he only did that in Jeffy's mind.

Retrieved from "https://villainsfanon.fandom.com/wiki/Mario_(SuperMarioLogan)?oldid=126529"
Community content is available under CC-BY-SA unless otherwise noted.