Kill SpongeBob and Squidward for throwing him in jail (succeeded with Squidward, but failed with SpongeBob)

Mr. Eugene Harold Krabs is the titular main antagonist of the YouTube Poop video entitled "Mr. Krabs' Unquenchable Blood Lust", created by EmperorLemon. This YTP portrays Krabs as a deranged serial killer who started his killing spree when he discovered that the Health Inspector from the "Nasty Patty" episode was a con artist who ate fast food for free and did not pay for it.

He has the same voice actor from the show, Clancy Brown.

The YouTube Poop begins with SpongeBob SquarePants and Patrick Star in Mr. Krabs' tent. While they were looking at Krabs' map, Mr. Krabs suddenly appears behind SpongeBob and Patrick, and he has a chainsaw in his hands. The scene then goes back three days earlier to explain Krabs' descent into madness and murder.

It all started when the Health Inspector arrived at the Krusty Krab. Mr. Krabs then learns that the Health Inspector was a con man who ate fast food without paying for it. Wanting revenge, Mr. Krabs forces SpongeBob into helping him poison the Health Inspector with a Krabby Patty, and then hiding his body. After they hid his body, two police officers came by, and Krabs murders them by shooting an RC at them and then sets their car on fire with a flamethrower to hide the evidence. Later on, at night, Krabs dreams about murdering more people, and his blood lust drives him insane.

When Squidward Tentacles noticed that Mr. Krabs was acting rather strange at work, he and SpongeBob quickly call the Navy on him. They then proceed to tie up the deranged crustacean, and the police arrive to arrest him. Shocked that his two employees gave him up to the police, he angrily declares vengeance on them both before being beaten up by the police officers.

While in prison, Krabs transformed himself into Moar Krabs and proceeded to rip two police officers' faces off. He then escaped through the sewers in a reference to the film The Shawshank Redemption. He goes to Squidward's house first, and he murders him by clubbing him to death with an axe. When SpongeBob and Patrick learned about their neighbor's murder, they immediately left Bikini Bottom in order to escape Krabs' wrath.

The scene then goes back to where the video started, with our two aquatic friends in Krabs' tent. They proceed to open up a paint can, and to their horror, instead of paint, they instead find blood erupting from the can. We also see that Krabs had cut off Squidward's head, and then he wrote an inscription over it stating that he "gotta have more."

Krabs proceeds to chase them out of his tent, and he then catches Patrick with a lasso. SpongeBob soon went to hide in his house, and Patrick comes to his house as well. However, instead of our lovable goofball, it turns out that Krabs had murdered him and is now wearing his skin. Krabs then takes out a knife and approaches SpongeBob with it. He then hits SpongeBob with the knife, only to discover that there was a bomb wrapped around his chest. When he asked his former fry cook what he was planning with that, SpongeBob states that he was going to do what should've been done a long time ago. He then ignites the bomb, and it explodes, killing him and the deranged Krabs, and ultimately ending Mr. Krabs' blood lust forever.

After the credits roll, Patrick apparently told this YTP as a story to SpongeBob in order to try to make him feel better about being ugly. SpongeBob responds by chewing him out. 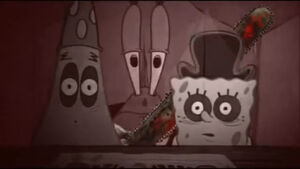 Mr. Krabs holding a chainsaw before tried to kill SpongeBob and Patrick. 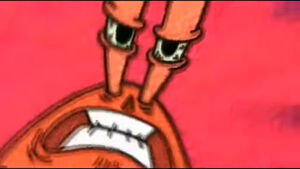 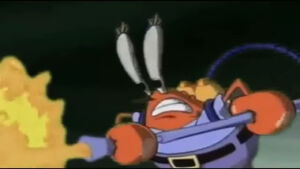 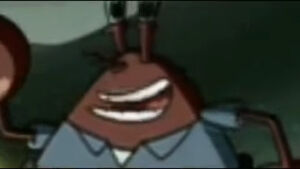 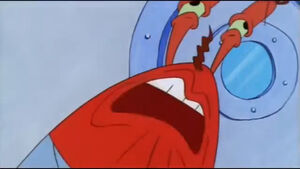 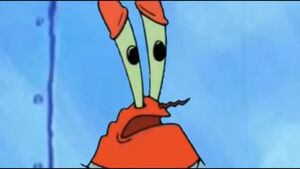 Mr. Krabs' cannot believe he got betrayed by SpongeBob and Squidward. 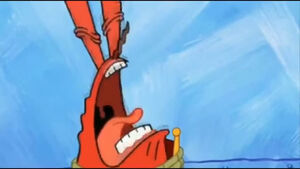 Mr. Krabs threatening SpongeBob and Squidward before he got caught by two police officers. 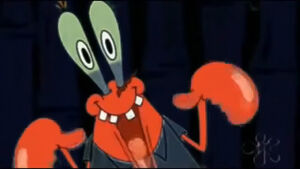 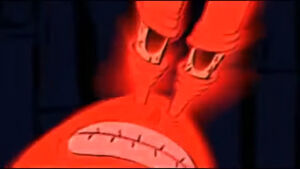 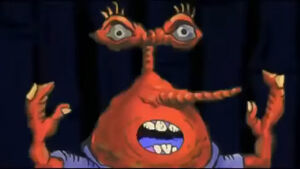 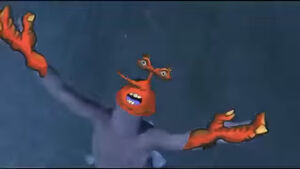 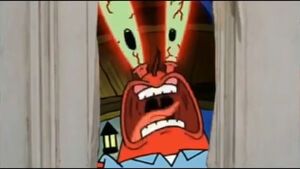 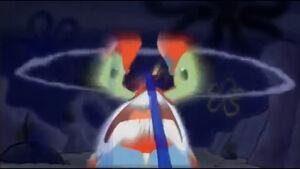 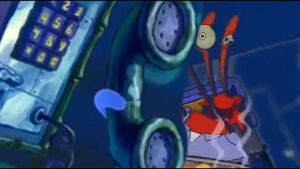 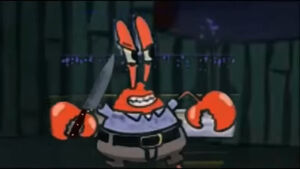 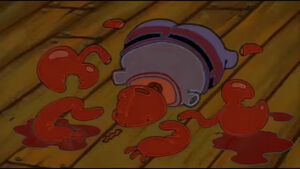 Mr. Krabs' dead body.
Add a photo to this gallery

Retrieved from "https://villainsfanon.fandom.com/wiki/Mr._Krabs_(Mr._Krabs%27_Unquenchable_Blood_Lust)?oldid=104446"
Community content is available under CC-BY-SA unless otherwise noted.