Start a Wiki
The Pigs (also known as the Bad Piggies) are the antagonists of Black Yoshi and the Birds. They are a team of pigs who are the Angry Birds' arch-enemies.

There were originally four members until Greg was introduced and Mr. Pig was revealed to be the leader.

Mario was a member of the Bad Piggies team in the last episode of Black Yoshi and the Birds, even though Mario is not a pig.

Despite being villains, the Pigs understood that they are not allowed to make a mess in the house because the Angry Birds might get kicked out if the house is messy, and they didn't want them to get kicked out.

They are all green pigs, and have the same eye color.

King Pig wears a crown on top of him, and has brown eyebrows.

Helmet Pig wears a damaged helmet, and has half purple eyes from getting hurt. The helmet pig is the only member of the team to not have ears or eyebrows.

Ray is the only pig to not wear accessories. He has the same color eyebrows as the King Pig.

Greg has an orange moustache, white eyebrows and blue eyebags. He is the only pig to not have his mouth shown.

Despite Mr. Pig being the real leader, Ray and the Helmet Pig were King Pig's minions.

He was voiced by Lovell Stanton, who also portrayed Bubbles, and voiced Bowser, Joseph and Chef Pee Pee. His voice sounds like Bowser's voice, most likely due to both characters having the same voice actor.

He appears in every episode of Black Yoshi and the Birds except for the first episode.

Despite being called King Pig, it is unknown what his real name is.

Helmet Pig (also known as Stupid One and Dumb One) is a pig who acts stupid because he doesn't talk very good and his helmet got damaged. In Black Yoshi and the Birds episode 6, he wore a pumpkin disguise. 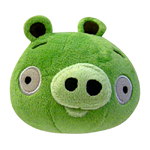 Ray is a regular pig with no accessories on him. 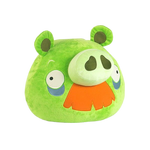 Greg is a pig with a moustache, and a new member of the pigs. He came from Wisconsin.

This plush was used for the Foreman Pig in the fourth episode of Black Yoshi and the Birds although they are most likely the same character.
Retrieved from "https://villainsfanon.fandom.com/wiki/Pigs_(SuperMarioLogan)?oldid=148157"
Community content is available under CC-BY-SA unless otherwise noted.