Keep on ruling his world and abuse his servants (ongoing).

Betray Exetior (succeeded).
Create his own world where he rules as a god (ongoing).

Sark was originally a demon of sharpness who lead the sharpers in invading other worlds and mocking the mortals. Sark joined Exetior in his quest to defeat the Highests, but after the war the Highests came out victorious and sent Exetior to Hell, they kept Sark and Pervision, torturing them until they became insane. Many centuries later, Sark escaped and found another universe housing anthropomorphic animals and killed Sonic the Hedgehog. Sark then took his appearance and proceeded to kill all of his friends and forming an alliance with Exetior. After demonizing the entire population of Mobius, the male population become strangely idiotic, mindless and perverted, forcing Sark to kill them all after they tried overthrowing him and left only the girls alive.

Rosy decides to escape from him and goes to Exetior's base, where she develops a crush on him and leaves them after a short amount of time. She returns to Sark's base only to be greeted by her world version of Cream and Sally. Sark arrives and taunts Rosy, revealing that he had Cream watch over her the entire time and knows about her secret visit. He and his servants are quickly defeated by Exetior's, Sark advises them to leave until Exetior himself shows up and takes Rosy with him. Sark is bewildered and frustrated, and plans on getting revenge on Exetior.

Sark's second secret is him planning with Dr. Eggman on collecting the Time Stones to enslave other worlds. He then asks the two Time Stones he has to show him a future where Exetior subdues the Freedom Fighters, but is instead watching a future of Rosy being taken away. He races away, angered.

Sark has a much more important role in the true/canon ending of the game. After Sally is possessed by a Highest, Amy and Cream find her looking over at Sark, who is looking down on Exetior and Negagen sitting next to a buzzsaw, revealing that Sark has finally betrayed them. Before the game ends he utters "Now die..."

In the remake of Nightmare Beginning Sark can be shown in a secret with Tails. After murdering a few animals to escape from Exetior he ends up in Sark's dimension, finding the corpses of his victims. Sark reveals himself and even revealed that he raped Amy/Rosy before killing her, he attempts to kill Tails but he defends himself from the demon. Exetior later finds a ring which leads to Sark's dimension.

Unlike Exetior, who is supportive and kind to his servants, Sark is the exact opposite and rules over them with an iron fist. He is considerably cruel and wicked when addressing his minions if they fail with his orders and won't even hesitate to threaten or kill them. This shows when Rosy returns back to him and he plans on executing her and threatening to murder Cream who only chimed into the conversation.

Sark is also quite cunning and manipulative, as he has persuaded Exetior that he has been helping him when in reality he wants to overthrow him and lead the exes. He futher shows his arrogance and abnormally large ego to have everything to himself by demanding Rosy back from Exetior at all costs. 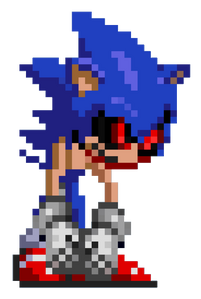 Retrieved from "https://villainsfanon.fandom.com/wiki/Sark?oldid=149946"
Community content is available under CC-BY-SA unless otherwise noted.