The Watcher
That staring fucker (by the Collector)

Invisibility to the naked eye

Teleportation
Making itself visible only to its victims
Intangibility
Shapeshifting
Omnipresence

Stalk whoever sees it directly

Smiling Sonic, also known as the Watcher, is a character essentially serving as Capitano Nox's own interpretation of Sonic.exe.

Smiling Sonic, as the name implies, resembles Sonic the Hedgehog but it is also very different from the character: Smiling Sonic is extremely tall, reaching about the 3 meters of height, and its arms are so long that they reach the ground; its colors also differ from the original Sonic's, with its fur being close to purple, its front torso, snout, arms and the inside of the ears red, and its socks, gloves and shoes black; its most memorable traits are however its multiple human-like eyes and its unnaturally long mouth, the latter being always locked in a smile.

Smiling Sonic also possesses a second form: in said form it's covered by a black liquid seemingly coming from its eyes, its mouth appears melted and its torso is open, revealing even more eyes inside. In this form its gloves and shoes also become made of the same liquid; the gloves also gain claws, making them look more like actual hands than just accessories.

Smiling Sonic is a very enigmatic being and little to nothing is known about it. The creature definitely possesses some intelligence since it relentlessly stalks its victims but its motives and goals are completely unknown, leaving it ambiguous whether it wants to harm the people it stalks or not. It's also unknown why it looks like Sonic, leaving it up to debate whether it looks like that because it likes the character, it wants to look less intimidating, it wants to mock the character or another reason entirely.

Smiling Sonic is normally invisible to the naked eye but it can be seen through the use of a camera. If Smiling Sonic realizes it's been seen, it will start stalking the person wherever they go, appearing on any camera they will use. After an unknown amount of time the person will start seeing Smiling Sonic on every reflecting surface until, eventually, they will see it everywhere. It's been noted that Smiling Sonic stalks only those who have seen it directly, so if someone sees a picture of it they'll be safe. 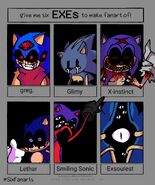 Smiling Sonic alongside other Sonic.exe OCs (by Spoon). 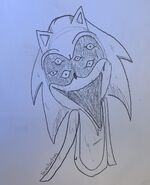 A doodle of Smiling Sonic (by NarrowYourEyes). 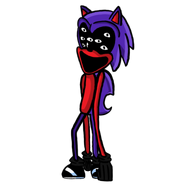 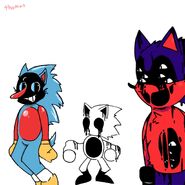 Smiling Sonic alongside two other Sonic.exe OCs (by thomas_iguess). 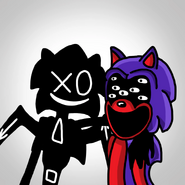 Smiling Sonic and Xetra (by SleepingGuy).

Smiling Sonic giving its back to a photographer (by BalefirePhoenix).

Smiling Sonic turning to the photographer (by BalefirePhoenix). 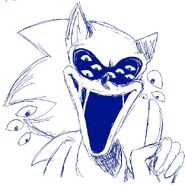 A doodle of Smiling Sonic (by skitkat).