Villains Fanon Wiki
Register
Don't have an account?
Sign In
Advertisement
in: Mature, Obsessed, Doctors and Scientists,
and 38 more

Eating the flesh of mobians and flickies.

Hunting for new prey.
Working on his inventions.

Kill Sonic the Hedgehog and eat him (succeeded).
Kill and consume all mobians.
Kill and eat Tails (both ongoing).

Starved is an antagonist co-created by averyavary and Dumbie, and solely owned by the latter.

He is an alternate version of Dr. Robotnik who was driven to madness and a deep obsession to consume the flesh of mobians. Following his defeat at the hands of Sonic, Robotnik would consume a piece of mobian flesh and become enamoured by the taste of it, becoming obsessed with gaining as much meat as possible to sustain himself.

Now driven by a desire to consume all mobian life across South Island, Robotnik gradually began refitting his badniks with mechanics and alterations that would allow them to capture and cook mobians until he finally managed to kill Sonic himself. He is Sonic the Hedgehog and Miles "Tails" Prower's arch-nemesis.

He is voiced by Jack Gore.

Starved appears in his standard attire, but his body itself has several noticeable changes. On account of his mobian diet, his skin would begin to redden to the point of appearing bright red and emitting a rotten smell. He also appears to be suffering from alopecia, with his mustache having fallen out completely on account of his mobian diet, leaving it impossible for him to grow anything back. He also no longer wears his trademark glasses and his sclera cannot be seen, with his eyes appearing pitch black, which may be a side effect of his newfound diet.

Starved is practically the same Robotnik he once was, being arrogant flamboyant and devilishly intelligent. However, his run-in with the charred flicky had graced him with complete insanity and a morbid obsession to consume all life across Mobius. Motivated by nothing but his insatiable hunger, Robotnik is obsessed with trying to consume as much mobian flesh as possible and has made it his new life goal to do so, destroying any resistance that stands in the way of his goals. His manic fixation with mobian flesh has lead him to have no regard for his own health, being contempt with letting his own flesh rot and his body become unwell as time went on, showing just how deep his infatuation for mobian flesh has gone.

In spite of his ever-devolving mental state and psychotic nature, Starved still retains his exceptional intelligence with his 300 IQ and fascination with mechanics and robotics, having refitted his badniks into carrying out his orders of capturing and cooking mobians for him to eat, as well as creating Furnace, a metal duplicate of Sonic on-par with the Blue Blur's speed and agility, making him Starved's greatest creation.

Regardless of his mental stability (or lack thereof), Starved is still a deadly force to be reckoned with and still retains his malicious, cruel, ruthless and evil nature, as well as his clearly selfish and self-centred desires of wanting all mobians (or rather, their flesh) to himself due to his obsession with the euphoric taste their flesh brings. He's even shown to be quite sadistic, having dark and violent fantasies of tearing off Tails' tails and savouring the moment out of pure enjoyment, even gloating in displaying Tails' tails to an unsuspecting guest.

Starved is a meticulous and driven scientist, and in spite of his madness, is very sophisticated and affable in his mannerisms and the way he speaks, almost appearing polite in a sense when greeting his opponents. He also seems to have some twisted form of admiration for mobians and even proclaims to "love" Sonic, but all of that is in relation to his obsession with how good their flesh tastes.

Originally, Starved lived his life as the Dr. Robotnik of his universe hellbent on conquering the world and defeating Sonic the Hedgehog. After the events of his first defeat, Robotnik would begin cleaning up his base of operations after Sonic wrecked it when he stumbled upon the corpse of a flicky that had been heavily charred on account of damage done by a badnik. Although he was put off by the thought of taking a bit for curiosity's sake, the aroma coming from the corpse intrigued Robotnik, and he took a careful bite from the flicky. Immediately after taking a bite from the flicky, Robotnik became enamoured by its euphoric taste. Afterwards, Robotnik took the flicky corpse and savoured it for a few days.

No longer wanting to take over the world and go after the Chaos Emeralds, Robotnik now desired to satisfy his insatiable hunger in the only way he knew how: consuming the flesh of mobians. Soon enough, Robotnik began to refurbish his badniks into making them able to kidnap and cook flickies inside of them. He also began construction on his latest creation: Furnace, a metal sonic replica that could keep up with Sonic's speed and snatch up unsuspecting prey to cook and deliver back to him. However, on account of his newfound diet, Robotnik began to suffer the debilitating consequences. His skin would swell and redden and his mustache hairs would gradually begin falling out. A foul stench would also begin emitting from him.

Eventually, Robotnik launched an attack on Little Planet and began his enslavement of it, forcing Sonic to face him once more and save Amy Rose. Unbeknownst to Sonic, Amy had already been captured, cooked and killed by Furnace by the time Sonic arrived at Stardust Speedway to race his metallic duplicate. As the race began, Sonic managed to quickly outpace Furnace as Robotnik observed and eventually caught up. As Sonic began taunting Robotnik, Furnace raced to the end and set up a trap for Sonic, placing a wall of spikes at the finish line. As Sonic saw Robotnik slow down, he figured that he had won until he collided face-first with the wall of spikes, killing him instantly.

Overjoyed to have finally killed Sonic, Robotnik took his corpse back to his lair and kept him as a trophy to eat on special occasions, relishing in the fact that he was finally able to eat the one thing he desired most. Afterwards, Robotnik managed to gain hold of the Time Stones and decided to use them to continue to infinitely feed for as long as he could. However, his plans were put in jeopardy when he discovered Tails, a fox that was beginning to fight back against Robotnik and that he had previously encountered, but not yet consumed, and now greatly desired to do so. 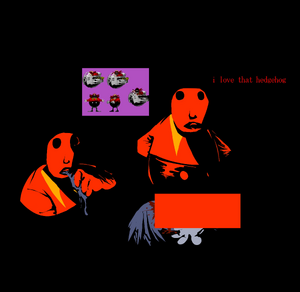 The first image of Starved. 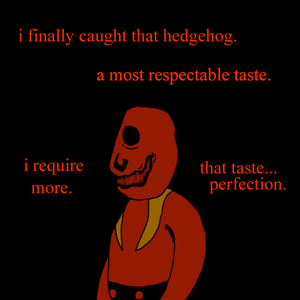 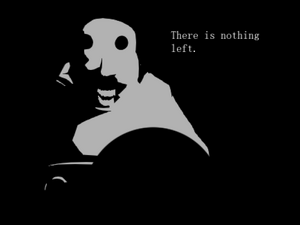 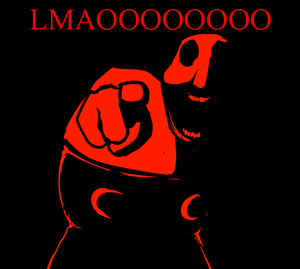 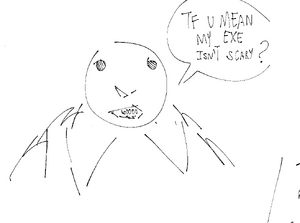 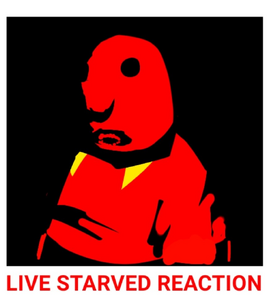 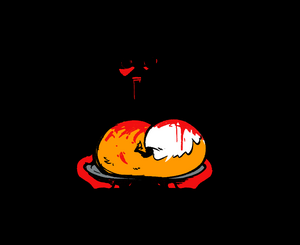 Starved presenting one of Tails' tails. 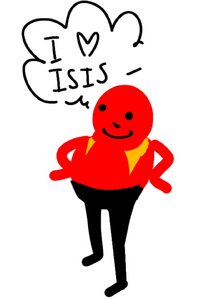 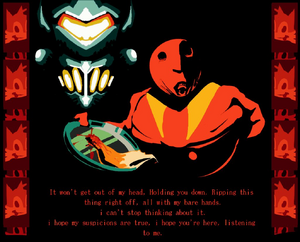 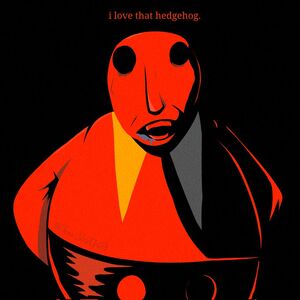