Going after weaker ones.

Find a weaker host.
Blow up the Hideout. (Both succeeded)
Continue to torture his newfound host and others.
Murder Smith Jones. (Both ongoing)

He is the sadistic, bloodthirsty minion of Slenderman and a lovecraftian horror who seeks to cause harm onto weaker beings via possession. In season 4, it was revealed that he is indeed the mind of HABIT, whom he aided in his destruction whilst the two were fused.

He also appears as a playable DLC character in The Silent Night under the name of The Possessor, and returns as the overarching antagonist of the non-canon black-and-white spinoff video game Adrenaline for a God.

THOUGHT's voice was presented by XOBITES.

The origins of THOUGHT remain a mystery, as the only thing we know is that THOUGHT is indeed the brother + mind of HABIT. The entire case revolving around THOUGHT is only left up for interpritation, although some fan-stories may exist.

THOUGHT first made his debut in episode 10 - season 2 of Rememberence inside of an abandoned warehouse whilst possessing Bart (though how he got to Bart remains a mystery). All of a sudden, Jason Hemwig accidentally knocks over something which caused THOUGHT to turn around. Luckily, Smith Jones and Jason Hemwig quickly hid before he could hear them. The two then agree to split up, only for Jason's clumsiness to return once more and accidentally prompts THOUGHT to turn around. Luckily, THOUGHT trips over a wire and gets tangled up in it, which allows Smith and Jason to escape. However, a false sense of security quickly happens as THOUGHT incapacitates Smith and tells him "Goodnight" before dragging him away.

Although mentioned by Jason about Smith's kidnapping, he never fully appeared in season 3.

In the first episode of season 4, THOUGHT is later seen face-to-face an upside down Smith Jones, hanging by rope in an unknown building. THOUGHT proceeds to laugh at Smith and tells him that his friends were just "useless" and were unable to save him. He then shows Smith a victim tied up to the floor, in which THOUGHT proceeds to taunt the victim before driving a knife down his forehead, ending at the tounge. After he finishes killing the victim, he proceeds to introduce himself, all while ranting to (and teasing) Smith.

THOUGHT then shows Smith some more tortured victims as he mentions that Smith will be apart of his collection. However, Bart Montgomery, gaining conciousness, quickly unties Smith and tells him to leave through the exit. As Smith escapes, THOUGHT quickly takes control of Bart again and proceeds to threaten Smith that if he doesn't come back, he would kill his newborn baby brother next. Smith, having none of it, quickly flees from THOUGHT and runs back to the Hideout.

At the end of season 4, THOUGHT leaves a message saying "DO YOU SEE HIM?" before jumpscaring the viewer to make it seem as THOUGHT was attacking them.

In episode 8 of season 6, THOUGHT appears again (this time at the Hideout) after possessing Bart (after the latter managed to break free of THOUGHT's control for some time) once again and proceeds to call in a few allies (Slenderman and others) to destroy the Hideout. After seeing that the others could not even do that single task, he proceeds to head to the boiler and blow up the Hideout, temporialy killing slenderman, permanently killing his allies and breaking Jason's legs.

Only flashbacks and flashing images of THOUGHT appear, and the only slight mention of THOUGHT is when he saw his newborn baby brother dead and massively mutilated on the floor. (a sign that THOUGHT obviously killed the brother)

THOUGHT encounters Smith and his crew once again during episode 10. Smith, not fooling for his deception, calls him out on his strategy on simply making them believe that Bart was trying to kill them, which was in fact correct. In one final attempt to kill Smith, Jason later appears and stabs THOUGHT in the chest, to which THOUGHT ends up shooting Jason in the forehead, presumably killing THOUGHT and leaving Jason & Bart dead for some time.

The two were later revived by an unknown force however, and it's presumed that THOUGHT may be dead. Though this has yet to be confirmed.

THOUGHT appears in the third episode of season 10, this time accompanied by Oddity. THOUGHT, as usual, possesses Bart Montgomery yet again and forces him to leap out of a window in Smith Jones' house. THOUGHT then begins to bang on the door, forcing Smith to open the door in a panic. Smith immediately remembers the appearance of Bart as THOUGHT himself; inhabiting the body of Bart.

Suddenly, THOUGHT pauses for a bit before asking if he could get something, to which Smith disagrees. This doesn't stop THOUGHT however, as he simply shrugs that off before "leaving". That "something" would later turn out to be Oddity, as Oddity slashes at Smith before simply knocking him to the ground. THOUGHT then replies by saying that he "just needed to find his 'assisstant'" before berating Oddity for trying to be as destructive as him, even outright saying that he'd "never be like him".

In the fourth episode, THOUGHT heads towards the dining room where Jason Hemwig is sitting. THOUGHT recognized him as the person that temporiarly killed his host and proceeded to throw an empty glass cup at Jason's head. After Jason quickly recovered, THOUGHT explains that he is trying to find the rest of Smith's crew with Oddity. After Jason refused to give their locations, THOUGHT begins to taunt Jason, talking about how much of a suck-up he was for his friends.

After a long period of taunting, THOUGHT struck Jason's forehead, causing him to fall unconscious. THOUGHT then starts speaking to himself, about how he will have alot of plans for Jason once the others are found.

At the end of episode 9, THOUGHT confronts Frank, who had become heavily weakened. After a while, THOUGHT ends up making it short for Frank's life by stomping on his head, before killing Jason Hemwig once again, leaving to another revival. THOUGHT then dons the name of "the Eye" and seeks out Smith and his crew once again.

THOUGHT appears as a minor yet pivotal antagonist of Season 11, where he waits impatiently for Smith's crew to arrive, groaning about how boring it is to wait for the right moment in the far distance. As Smith Jones and his group climb over the walls of Desire Lake Forest, THOUGHT recognizes Jason Hemwig first, calling him a coward before setting up a "game", where the group is set at the far distance of the forest and have to try and get out. While the team runs fast, the same cannot be said for Jason, who ends up nearly out of breath, with THOUGHT catching onto him.

Despite this, Jason runs as fast as he can to avoid certain death, until a tree summoned by Geminald falls right on to his leg, crushing it, and giving THOUGHT the chance to devour it. THOUGHT then attempts to climb over the tree only for Smith to fall back and carry Jason during the sequence, only stopping when the gate is blocked off by the Fog. Geminald then comes into slight view, and with a click of his fingers, he sends all but Smith out of Desire Lake Forest to deal with him once and for all.

THOUGHT is last seen at the climax for Season 11, where he is seen observing Smith at a far distance after becoming the Sanctum. THOUGHT chuckles to himself, before proclaiming that Smith had just "unleashed a newer chaos onto the world", in another attempt to secretly gaslight him, before teleporting away.

Under the name of The Possessor, THOUGHT returns as a playable killer in The Silent Night, for the Worst THOUGHT DLC pack, which included Smith Jones as the DLC survivor, and the Possessor as the DLC killer.

He appears exactly the same as his original self, with the exception being that he can paralyze nearby survivors to bring to the Power. He also possesses alot of abilities, such as Throwing blades, Shadow Bomb (similar to the Shadow and teleportation. It's not until we reach his Final Fatality that we know exactly why he lives up to his name.

His final fatality involves holding the survivor up and draining the conciousness out of the being. He then proceeds to swap bodies with the previous host and use it to trick other survivors.

THOUGHT's real form is never seen and is left up for interpritation, nor can it be comprehended by human minds. Although when he possesses Bart Montgomery, he suddenly manipulates the former's mind and turns him into a more darker being.

His appearance varies on whoever gets overTHOUGHT by him, but when he overTHOUGHT's Bart, he seems to have altered his appearance to a sinister glare, with a sadistic grin on his face. This may be due to him making his host(s) "healthy". He is often seen with a certain turquoise distortion when he shows up on camera.

In the non-canon spinoff black-and-white video game Adrenaline for a God, THOUGHT takes on the exact same appearance as last time but with a few differences. His turquoise distortion is now gone, his eyes are now pure white and he seems to be wearing a hoodie. THOUGHT even appears to mostly represent/foreshadow his true form, as he also appears to be donning goat-like horns and arrow-like tendrils.

Some sketches of THOUGHT shows him in a much more disturbing form, although all sketches are different.

THOUGHT is a heavily sadistic and bloodthirsty being who takes pleasure in devouring, killing and torturing victims, even more than HABIT does normally. To him, torturing his victims is as natural for him as living. He often likes to belittle others to the point that he sees them as stepping stones to his goals, making him a bully.

Similar to his 'brother', he can also be seen as a coward, having taken the body of a weaker being rather than one with a strong will or stronger/equal power, such as the Slenderman. Despite this, he improves his host's body and uses it to cause destruction, even blowing up the Hideout at a certain point.

THOUGHT is also the twisted mind of HABIT (and by extent, Bowserbub) himself. However, he still shows a clear moral agency and shows a huge ammount of sadism in his actions. If you could guess, THOUGHT really does live up to his name.

While he did show to care for Slenderman at first, this was only pragmatic, as he revealed in his rant that he wanted Smith to kill Slenderman by finishing the Ritual of Banishment. One of THOUGHT's most biggest weaknesses though is his arrogance, as his last words were him remembering the past attempts of failing to kill Smith Jones and having scoffed at the fact that he could ever be defeated.

After some time to think about it, the creator had stated that THOUGHT's prescense can be hateable at times, but also "laughably evil" as well (a term used for villains who are funny to the audience, but is shown to be taken seriously in-universe). This often reffers to his speech before driving a knife down a victim's skull, and even when he is doing his infamous rant towards Smith Jones. He's also proven himself to be very petty, having only left his allies to die and had released Avarus just so he can anger Slenderman.

Adrenaline For a God: 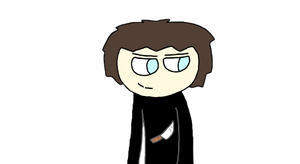 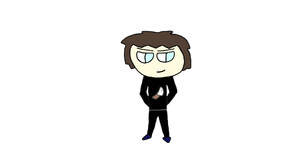 A render of THOUGHT's full body whilst possessing Bart Montgomery (via SleepingGuy). 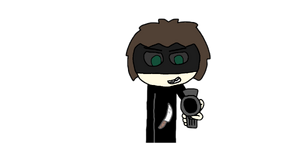 Artwork of THOUGHT with turquoise eyes (via SleepingGuy). 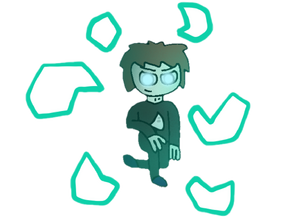 A render of THOUGHT via SleepingGuy. 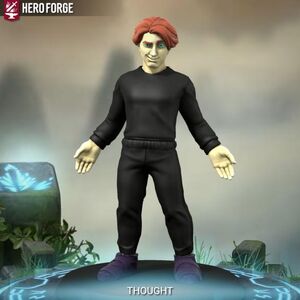 THOUGHT in 3D by BrandonDarkOne47 on Discord.