The Ouija Demon (although never called that in the video)

The Ouija Demon is the main antagonist of the SuperMarioLogan video SML Movie: The Ouija Board!. It is an evil entity from a Ouija Board (a board game that was alledged to be cursed by ghosts) that possesess Cody's Ken doll.

After Bowser Junior, Joseph and Cody play Trouble!, they play Ouija, the flat board. After turning off the lights, Junior asks if Cody is gay and to their surprise, Ken, holding the planchette, responds by landing on "Yes", impying that he's possessed. Then, when Cody asks what is the meaning of life, Ken starts to move, spelling "DEEZ NUTS" with the planchette. Junior and Joseph get offended and Junior calls the ghosts of the game "assholes". Chef Pee Pee tries to warn them that game is possessed by demons, but Junior doesn't believe it's possessed and starts to mock the demons. Chef Pee Pee tells him if he or Joseph keep taunting the demons, they'll get killed.

When Junior, Joseph and Cody sleep, the camera zooms in on Ken and the screen fades to black. Chef Pee Pee wakes them up, asking them who made a mess in the kitchen, so Junior, Joseph and Cody follow him in the kitchen and find that someone wrote "DIE" with Go-Gurt, but they denie that they did the mess and go back to sleep. However, before they go back to sleep, Chef Pee Pee tells them that if he sees another mess, he'll hang them by their throats.

So, Junior, Joseph and Cody go to sleep again, the camera zooms in on Ken with Go-Gurt in his hands, so he was the one who made the mess with Go-Gurt (but it was in fact a demon). The screen fades to black again. A few minutes later, Ken is covered in flour and Cody wakes up Junior, Joseph and Cody, angrily asking who made another mess in the kitchen. They follow him in the kitchen again and find one of the countertops saying "DEEZ NUTZ" with a mad face on the bottom in flour. They say that they didn't made the mess because their hands are clean and they go back to bed. The camera zooms in on Ken and it fades to black.

While Junior and Joseph sleep, Cody wakes up and realizes that Ken is gone, so he goes in the kitchen to look for him. In the kitchen, Ken has put five Bologna sausage in the kitchen and throws another one in the ground. When Cody comes in, Ken spins his head (like possesed Regan McNeil from The Exorcist) and Cody finds out that he was the one that's being making messes in the kitchen. He then jumps at Cody and eventually murders him. Chef Pee Pee turns on the lights for a glass of water, only to see pieces of Bologna sausage scattered all over the place. He goes to check at the camera he set-up and finds Ken walking by himself out of Junior's bedroom. 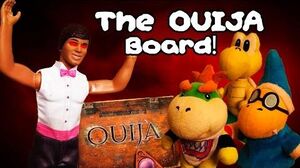 SML Movie The Ouija Board!
Add a photo to this gallery

Retrieved from "https://villainsfanon.fandom.com/wiki/The_Ouija_Demon?oldid=135596"
Community content is available under CC-BY-SA unless otherwise noted.