Managing Fazbear Entertainment and it's restaurants.

William Afton, later known as Springtrap, is the overall main antagonist of the Squimpus McGrimpus YouTube channel, serving as the main antagonist of the FNaF VHS series. He is the co-founder of Fazbear Entertainment who, after the death of his son Joseph in the Bite of '83, went on to murder five children in the Missing Children Incident. He is also the father of Michael Afton.

Following his death from being mutilated by the Spring Bonnie springlock suit, and after being moved to Fazbear's Fright, he would later become Springtrap, vowing revenge on Michael.

Following the closure of Fredbear's Family Diner, all information about the incident, now dubbed the 'Bite of '83', and the now-abandoned animatronics would be covered up. Later, Fazbear Entertainment would be created, and the diner would reopened and rebranded as Freddy Fazbear's Pizza, introducing four new animatronics: Freddy Fazbear, Bonnie the Bunny, Chica the Chicken, and Foxy the Pirate. The new pizzeria would prove to be popular with children, even spawning a TV show produced by Wondermation Studios.

Mournful of Joseph, William grew to despise Michael, wanting to kill him. However, the problem was that he knew he would get caught because of it. Therefore, he managed to find another way to vent his vengeful anger: he would dress up as Spring Bonnie, go to Freddy Fazbear's Pizza, lure some troublemaking children similar to Michael into the backrooms, and sadistically murder them, before hiding their corpses in the animatronics. He did this with five children: Lucas, Angie, Nicole, Benjamin, and Charlie, the last being Henry's daughter.

After the murders, Fazbear Entertainment would increase security at their pizzeria, introducing the toy animatronics, which would identify criminals through their facial recognition features, as an effort to prevent the murders from happening again. Meanwhile, the ghosts of the children would go on to possess all four animatronics, with Lucas possessing Bonnie and his sister possessing Chica, while Charlie would possess the newly-introduced Puppet animatronic. Afton would also make a recording about why (and how) he committed the murders, before warning Michael not to touch it at the end.

A few more years later, the pizzeria would shut down due to the animatronics starting to smell bad and secrete blood because of them. Not long afterwards, Afton would return to the pizzeria and destroy the four animatronics. However, this would release the ghosts, who would proceed to terrorize him. William dons the Spring Bonnie suit in an attempt to hide from the ghosts. However, a springlock malfunction occurs, causing William to be mutilated by the animatronic parts, killing him. The bathroom where William died would later be walled up.

However, William would be somehow revived, becoming Springtrap. Years after the closure of Freddy Fazbear's Pizza, Fazbear's Fright, a horror attraction based on the murders at the pizzeria, would be built. Springtrap would be moved there, activating and lurking its hallways, wanting revenge on Michael.

William is abusive, psychopathic, egotistical, sadistic, and utterly ruthless. He outright states that he has no remorse for his victims, pointing out that he made their deaths "quick enough to be efficient, but long enough to make it last." He is also extremely petty, only killing the children so as to relieve his enmity towards Michael.

Despite hating Michael, he is implied to have loved Joseph dearly. His accidental death at the hands of Michael drove him into grief, and would be the very cause of his infamous bloodlust. However, even before the death of Joseph, William thought of Michael as someone not worth his time due to being a troublesome kid, viewing him as a failure.

After transforming into Springtrap, he is shown to be more savage and wrathful, almost animalistic. His violence is far less hidden, and he now wants to flat-out kill Michael. 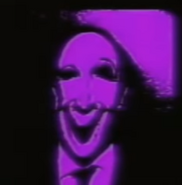 William Afton at the end of Facial Recognition Testing

Springtrap in Nonexistant Video
Add a photo to this gallery

Retrieved from "https://villainsfanon.fandom.com/wiki/William_Afton_(Squimpus_McGrimpus)?oldid=145093"
Community content is available under CC-BY-SA unless otherwise noted.